Human colonists have settled the planet January, a tidally-locked world where it is too cold to survive on the nightside and too hot on the dayside. Instead, the few human settlements are located in a narrow band of twilight, struggling to survive. Xiosphant, the largest human city, is a dictatorship where the rulers justify their cruel tyranny with the excuse that this is a hard world. For a band of young rebels including Bianca and Sophie, this excuse does not ring true and they begin working to change things for the better. Caught and condemned for her "crimes," Sophia is cast out into the darkness to die. Fate has other ideas for her. 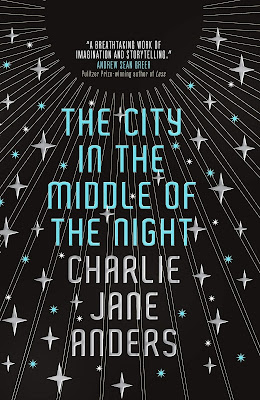 The City in the Middle of the Night is a stand-alone novel from Charlie Jane Anders, the author of All the Birds in the Sky. This novel is more overtly science fiction, delving into that thorny problem of how to survive on a tidally-locked planet, that is a world where one side always faces the star and one side faces away, trapped in eternal day and night.

This makes for a vivid setting, where humans can only survive in eternal twilight, although one that is perhaps a tad under-explored in the book. The novel mostly uses the setting as a backdrop to a story about communication, xenophobia and how to survive in a harsh environment without losing your humanity. If it wasn't for the fact that Anders started writing the book in 2013, I'd suspect some impact from city-builder/ice survival simulator Frostpunk, given the similarities in the hard questions of survival versus sociology. Snowpiercer is a more noticeably overt influence (especially since Anders worked on the TV version as well).

The story revolves around revolutionaries. The system is not working for everyone, with the underclass and labourers exploited by a wealthy ruling elite. The underclass plots revolution and this is as interesting as it ever is as a storyline, although there's an odd lack of connectivity between the revolution and the circumstances of the planet they're living on. It's unclear just how the rich are able to get away with not pulling their weight on a planet where literally the fate of the population is hanging in the balance. There's also a faint whiff of mid-1970s episodes of Doctor Who (which frequently revolve around rebels rebelling for the sake of rebelling against bad guys who are bad because they're bad) in some of these sequences, which is certainly fun but it feels like the themes could have been handled in more depth. Later sequences in the book, where the rebels start taking on the trappings of their oppressors as they gain more successes, do start to tilt in this direction but the themes don't really spring to life. I kept being reminded of China Mieville's handling of this idea in Iron Council, which was a lot more successful.

Still, this storyline is one of only two major narrative strands; the other, revolving around Sophie and the strange alliance she strikes up with January's rarely-seen native civilisation, is more successful. Sophie makes for an engaging protagonist thanks to her empathetic ability to communicate with the aliens and see a bigger picture than most other humans. The other major POV character is a much older, more world-weary and cynical survivalist and traveller, Mouth, and it's refreshing to see a more experienced and capable protagonist, albeit one whose cynicism has made her almost as incapable of dealing with new situations as the younger Sophie's inexperience. The writing is enjoyable, although the pacing feels like it could have been a bit peppier, with the story bogging down at several points (most notably when Sophie and Bianca escape to another city and it takes a long time for the storyline to get going again).

The City in the Middle of the Night (****) is readable and enjoyable, with a vivid if underexplored setting. It does feel like the book could have been tightened up a bit, and maybe the central themes of revolution and corruption could have been handled with more originality. As it stands, this is a solid novel but not one that's going to be lighting the world on fire in terms of originality. It is available now in the UK and USA.
Posted by Adam Whitehead at 13:42

Email ThisBlogThis!Share to TwitterShare to FacebookShare to Pinterest
Labels: charlie jane anders, the city in the middle of the night