All the Birds in the Sky by Charlie Jane Anders

Two children have immense and varying gifts. Patricia is a nascent witch, can talk to animals and has a special bond with nature. Laurence is an engineering and scientific genius who has built a semi-functional AI and a two-second time machine. As children they are both dismissed as freaks, which draws them closer together. They are separated in their teenage years but fate draws them back together as adults, in a world slipping into despair from political, technological and scientific challenges. 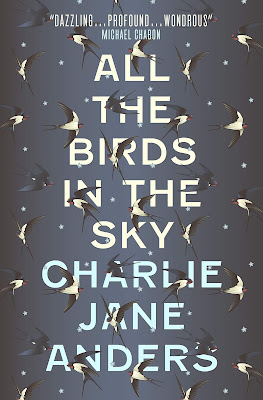 All the Birds in the Sky is the second novel by Charlie Jane Anders, a noted writer and critic best-known for co-founding SFF website io9 (for which, full disclosure, I have written the occasional piece). It's a novel rich in character and variety which develops two protagonists and has them engage in two distinct narrative threads (one science fiction, the other fantasy) which merge as the novel progresses.

It's a novel which wears many hats, from coming-of-age-against-adversity YA adventure (the opening chapters), to adult relationship drama to science fiction disaster novel to a lyrical fantasy fable. Anders' strength as a novelist is moving between these subgenres with impressive ease, flipping from the YA setting to the apocalyptic SF one on a dime but never losing the book's momentum. The book has a lot of humour and drama in it (along with a topping of tragedy) and it handles these shifts in tone with skill.

Core to the book's success is the characterisation of its two leads, the rigorous and logical Laurence and the more instinctive and spontaneous Patricia. The two characters gain strength from leaning on and learning from one another's differences, and overcoming their challenges by working together. Disastrous moments in the novel come from them not trusting one another or working as cross-purposes instead of pooling resources. It's a book that, above all else, focuses on the idea of empathy and understanding, and facing down challenges through cooperation rather than division.

There are some undercooked moments. I would have liked to have known more about the Order of Assassins that crops up several times in the novel, and some late-book revelations about how much the scientists and magicians know about each other come out of nowhere, but otherwise this is a very fine and appropriate novel for our times.

All the Birds in the Sky (****½) comes across as a fusion of Neil Gaiman (on a very good day), Diana Wynn Jones and Robert Holdstock, but with a twinkling flair to the prose that is all Charlie Jane's. It is available now in the UK and USA.
Posted by Adam Whitehead at 13:59

Email ThisBlogThis!Share to TwitterShare to FacebookShare to Pinterest
Labels: all the birds in the sky, charlie jane anders