The team at Angel Investigations are on top form, solving new mysteries and enhanced by the addition of Winifred Burkle - an astrophysicist with a gift for science and research - to the team. As Fred settles in (having spent five years imprisoned in another dimension), the team have to face the consequences of past actions, as Wolfram & Hart continue to undermine their operation and Darla returns...with a surprise for Angel. 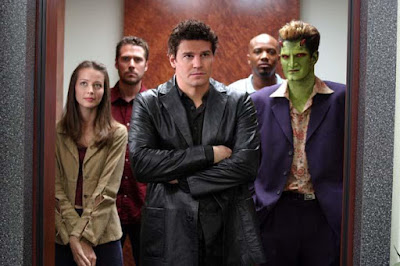 The second season of Angel was a success, with a great main story arc and lots of excellent character development, especially for Angel, a character you'd assume by now had been fully explored. The third season is more or less a direct sequel to the second, but the writers pull back on some elements they feel had already been explored in sufficient depth, such as making Angel a darker character or having Wolfram & Hart constantly being behind whatever evil is going on in any given episode.

They also - thankfully - don't explore the camp fantasy world of Pylea again. Although a nice change of pace, Pylea outstayed its welcome at the end of Season 2 and we can do without going there again. Instead, the consequences of the Pylea trip play out several times over the course of the season, particularly for Fred (a winning performance by Amy Acker) and Cordelia (an ever-improving Charisma Carpenter).

If Season 3 has a major problem, it's in its structure and pacing. The writers clearly decided that some storylines in previous seasons had been allowed to dominate too many episodes, so this season each story arc unfolds much more intensely, usually over 3-4 episodes max, separated by stand-alone episodes. This means that stories have much greater verve and pacing, but it also means that the growing narrative momentum of the season keeps being reset with stand-alone episodes, which vary in quality immensely. The story arcs, revolving around the return of Darla, the campaign against Angel by his old enemy Daniel Holtz (a fine performance by Keith Szarabajaka) and the birth of a child with a surprising destiny, are all pretty solid, but the gaps between the stories feel contrived at best.

The season also makes a series of curious decisions regarding characterisation which are still highly controversial. Wesley has been getting more ruthless and capable since the first season, but the way he goes full-on dark and borderline amoral at the end of the season feels a bit undercooked. It makes him a far more interesting character in the final two seasons, sure, but the way he gets there feels implausible. There's also the implication that Wesley, a thirty-something guy who's been around the block a few times, makes the decisions he does because he gets turned down by a woman he likes, which feels like a very juvenile motivation point.

There's also the treatment of Cordelia as a character. Through most of Season 3 she undergoes tremendous growth and improvement as a member of the team and ends up being arguably the most well-adjusted and empathetic member of the crew, which given where she started so long ago (in Buffy Season 1) is remarkable. The end of the season throws this development into some doubt. This is less of a problem in Season 3 itself, but paves the way for Season 4, where Cordelia's character is thrown under the bus in a manner that is still highly contentious.

Still, Angel's third season (****) is highly watchable with some impressive storylines, cliffhangers and dramatic moments. Character development is a mixed bag, and some of the stand-alone episodes are painful, but overall it remains a solid addition to the series, and paves the way for the more impressive (if more controversial) fourth year. It is available now as part of the complete series boxed set (UK, USA).
Posted by Adam Whitehead at 16:12