The mighty Transformers franchise turned 35 years young this month. The original Transformers toys and comic books hit shelves in May 1984 and began a run that has continued with only brief interruptions ever since.

Transformers began life at the 1983 Tokyo Toy Fair (held in June). Representatives from Hasbro in the United States were checking out what was hot in Japan and saw a big boom in transforming robots and mecha (human-piloted transformable vehicles). Takara was one of the most prolific toy companies in this space, working on two separate lines: Diaclone Car-Robots, which consisted of (very roughly) 1/60th scale recreations of contemporary cars and jet fighters which could transform into robots, and Micro-Change, which consisted of 1/1 scale mini-robots that could disguise themselves as household objects, such as tape decks, cassettes, a handgun, a camera, a microscope and deformed toy cars.

Hasbro purchased the licensing rights to both lines and brought them back to the USA to combine into one new toy range. The name Transformers came up early on (despite concerns that people might get confused with electrical transformers) and stuck, as did the taglines "More Than Meets the Eye" and "Robots in Disguise." Hasbro had benefited from a strong working relationship with Marvel Comics on their G.I. Joe relaunch a couple of years earlier and brought them on board to help develop a comic adaptation.

Hasbro also realised it might be better for actual writers to work on the franchise's premise and backstory. Senior editor Jim Shooter came up with the faction names (Autobots and Decepticons) and the idea that the Transformers were sentient alien robots from the mechanical planet Cybertron who had come to Earth in search of resources. Shooter then assigned Dennis "Denny" O'Neil, who'd had a hit run on Wonder Woman and Justice League of America for DC before moving to Marvel, to work on the property. O'Neil wasn't too keen on working on a "toy comic" and decided to move on, although he did come up with the name of Optimus Prime for the Autobot leader before quitting. A slightly desperate Shooter found a new collaborator in the form of Bob Budiansky, an artist-editor who'd wanted to branch into writing. Budiansky created the names and personalities for almost all of the other launch Transformers (starting with Megatron and Starscream) in a single weekend, before plotting out the first four-issue comic storyline in the next few days.

With Budiansky's basic work in hand, work proceeded in tandem on both the comic and also a cartoon series, to be produced by Sunbow Studios (owned by Hasbro's advertising arm). Hasbro wanted a full-scale, multi-media launch consisting of the toys themselves (backed up by a huge TV ad campaign), the Marvel comic and the cartoon series, so that kids and their parents couldn't turn around without seeing the word Transformers somewhere.

Unfortunately, this multi-pronged approach meant a bit of a delay before all the pieces were ready, which allowed Tonka Toys to steal a march on Hasbro. Tonka had also been at the same toy fair and seen the explosion in popularity and quality of transforming robots. They teamed up with Takara's arch-rivals, Bandai, who were producing their own transforming robot range under the name Machine Robo. Tonka launched the range in the US and Europe under the name GoBots in late 1983, a full six months before Transformers got to market, and initially achieved a significant level of success.

Tonka's gazumping of the idea caused discontent at Hasbro but, having spent a fortune on the project, they decided to continue. Transformers launched with a blaze of publicity in May 1984 and was an immediate huge success. The launch was helped by the Transformers comic - a media form which GoBots had unwisely ignored - launching at the same time, getting the story out there as well as the toys. GoBots also had an accompanying animated series, but for various reasons this was delayed until September 1984, launching at the same time as Transformers' and immediately suffering from being apparently pitched at a younger audience. There was also the matter of the quality of the toys: GoBots were at a much smaller scale than the Transformers and although this made them significantly cheaper, they were also considerably lacking in build quality, not really withstanding the punishment of play from young children (whilst Transformers could take comparably greater damage and keep trucking). Bandai were also unable to provide Tonka with new product, whilst Takara were churning out designs by the dozen that Hasbro could pick up. After two years or so, Transformers comfortably outpaced GoBots, with the latter line being discontinued in 1987 after a failed attempt to relaunch it with the Rock Lords spin-off line. 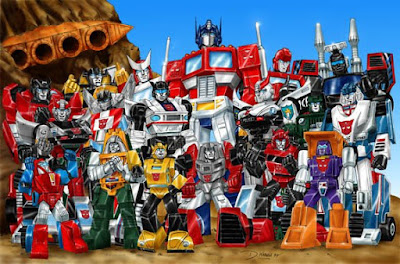 The initial Transformers run - now referred to as "Generation One" - lasted a startling seven years, reaching its end only in 1991 after steadily dropping sales. The Transformers comic also run for this entire time period and was still selling over 100,000 copies a month (outclassing many Marvel original lines) when it was cancelled, to the annoyance of both fans and creators. After an aborted 1993 relaunch as Transformers: Generation Two (which was merely a revamp of the existing toys with a few new ones), a considerably more thorough rethink was required. This resulted in Transformers: Beast Wars, a toy, comic and TV line which ran from 1996 to 1998 and was a huge success. It was followed by Beast Machines (1999-2000) and then, in 2001 and 2002, a relaunch of the more familiar concept with the Transformers: Robots in Disguise line and new comics focusing on the Generation One characters from Dreamwave.

Between 2002 and 2007 Transformers underwent a resurgence in popularity, propelled by both nostalgia for the original run and also by a trilogy of successful toylines and animated series: Armada, Energon and Cyberton. Just as these were winding up, Paramount Pictures released the first-ever live-action Transformers movie in 2007. Produced by Steven Spielberg and directed by Michael Bay, the movie was a smash hit financial success, despite a patchy critical reception. It was followed by no less than four sequels and a prequel: Revenge of the Fallen (2009), Dark is the Moon (2011), Age of Extinction (2014), The Last Knight (2017) and Bumblebee (2018). Notably, only Bumblebee (the first film in the series not directed by Michael Bay) was well-received critically. Further movies are planned, although plans appear varied over where they will serve as a reboot of the series or a continuation of the "Bayverse".

In addition to the franchise's long history on screen, in print and on toy shelves, Netflix recently celebrated the franchise in their original series, The Toys That Made Us, which is well worth a look for insights into the origin of the phenomenon.

Netflix are also developing War for Cybertron, a fresh animated series which will serve as a prequel to the story so far and will, apparently, be the first Transformers project to be aimed primarily at the adult fans of the franchise. This is expected to debut in late 2020.

So Happy Birthday to the Robots in Disguise, and here's to the very strong possibility they will still be around in another 35 years.
Posted by Adam Whitehead at 21:17