Scott Lynch has confirmed that he has completed and delivered the manuscript for The Thorn of Emberlain, the fourth book in his Gentleman Bastard series. 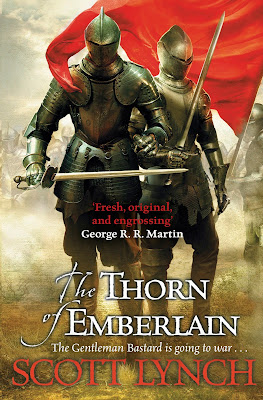 The series began with The Lies of Locke Lamora (2006) and continued with Red Seas Over Red Skies (2007) and The Republic of Thieves (2013). The latter two books in the series have been delayed as Scott has had significant health issues.

Three more books are planned for the series: The Ministry of Necessity, The Mage and the Master Spy (title subject to change) and Inherit the Night. 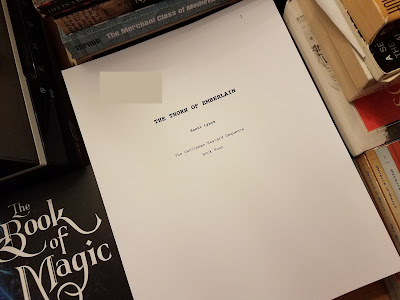 With the manuscript complete, there will now be revisions, rewrites and edits before the book can be published. Due to this, I suspect we will not see the book before 2020. This is still great news, and Lynch gets bragging rights for being the first of the "Unholy Trifecta" of long-delayed fantasy novels (along with Patrick Rothfuss's Doors of Stone and George R.R. Martin's The Winds of Winter) to get to print.
Posted by Adam Whitehead at 14:30

Email ThisBlogThis!Share to TwitterShare to FacebookShare to Pinterest
Labels: scott lynch, the gentleman bastard, the thorn of emberlain

And GGRM has said something about Winds of Winter and summer 2020. http://georgerrmartin.com/notablog/2019/05/21/thanks-new-zealand/

Let's hope the questionable end of the show gave him some fresh energy to present us with his version. Someone better prepare that cabin, though. :-)

With as long as we’ve been waiting, I’ll take it as is. Just print that thing and ship it out.
Hell, don’t even have to put it in hardback or paper. Just send out copies of what you got. :-)

Good stuff, haven't finished the second book yet but loved the first and have the third sitting on the shelf.

People always forget that we've been waiting 20÷ years for the third book in Melanie Rawn's Exiles trilogy, The Captal's Tower.

I read the same thing about August and was really looking forward to getting it then.

How about the fourth book in the elvenbane series by andre norton and mercedes lackey, the former being deceased now. GRHS

I do a search for it every once in a while

Elvenbane book 4, most anticipated book in my life, I check about onve a year. What a shame Lackey hasn't been able to finish it.

I talked with David Gerrold at ICon in Iowa three or so years ago and he told me that the latest Chtorr book was done. Lying swine.

Love these books. The characters are exceptionally vivid and relatable, including the antagonist. The overall flow of the series as a whole keeps you wanting more. At the same time each book is enthralling enough to be stand alone novels. Great read for anyone seeking a fun lighthearted romp, or something deeper

elvenbane 4 will most likely never come out because of lackey does not want the benefactor of the Norton estate to gain monetary gain for a book series he had nothing to do with. Cant remember where I read this but I remember it this way and was distraught

Love this series and end up re reading it every few years. I am hungry for more! If your like me and are looking for similar series I would like to recommend 2. First the "Riyria Revelations" by Michael J. Sullivan, second "The Cycle of Arawn" by Edward W. Robertson Both of these titles are great! Very similar in that it is a duo of talented guys but very different wolds and great stories...... Ironically the key, the child, and the crown apply to these series... In Riyria a child, and in The Cycle a Crown (ish)(head city Priest in a theocracy... bet he has a cool hat). so 2/3 out of 2/3 completed series...... and by completed i mean both these series are trilogy's that end.... then have a lot more books around the characters in past and future and wayyyyy wayyy past and in between.

Insane that it took 2 years for revisions... I'm guessing there was some major rewrites behind the scenes. Or maybe he wanted to have a head start on the next books so by the time this one releases, he'll be able to release the next in a timely manner (one can hope)

Hope this won't be another flop like doors of stone from the king killer chronicles by Patrick Rothfuss. It's been a decade... Love both authors

Pfft to Rothfuss. I won't read the third one if it ever comes out; I won't give him any more money. He said when the first book of the 'trilogy' came out that they were all done and would all be released in a timely manner because he knows fans hate to wait. The guy is a joke.