The year 2531. The United Nations Space Command and the alien Covenant are engaged in a war for control of vital resources. The UNSC starship Spirit of Fire investigates Covenant activity on the planet Harvest and uncovers evidence of a plot by the Covenant which could imperil all of humanity. The Spirit of Fire has to pursue a Covenant taskforce into deep space and attempt to thwart their plans without backup. 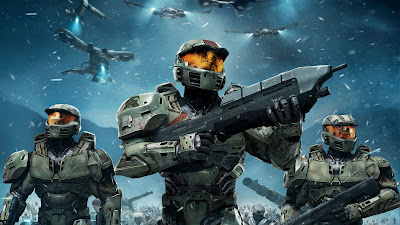 The Halo series began life as a real-time strategy game for Mac, before transitioning into a first-person shooter for PC before finally arriving on the original X-Box in 2001, the first shooter since GoldenEye to really work with a console controller. The series became a huge success, selling millions of copies of the original game and its sequels Halo 2 (2005) and Halo 3 (2007), and a spin-off, Halo 3: ODST (2009). In a sign of things becoming full circle, Microsoft decided to expand the franchise to other genres and commissioned a real-time strategy spin-off, Halo Wars, which was eventually released on the X-Box 360 in 2009. In 2016, the game was finally ported to PC as a "Definitive Edition," which is the version I have reviewed here.

Halo Wars gained praise on release as the first real-time strategy game made to really work on console. An intuitive interface allows players to build units, expand their bases, select forces and advance across the battlefield from a standard controller. Some standard RTS controls and ideas had to abandoned or simplified for the experience, but the transition was surprisingly successful.

As with most RTS games, Halo Wars opens with you having control of a single base. This can be upgraded with modules, such as supply depots (which generate supply, the game's sole resource), power stations (which generate power, which determines what upgrades and advanced units you can build), barracks, vehicle construction stations and aircraft construction stations. You can also add turrets to bases to help defend them. In an interesting twist, even a fully-upgraded base can't hold all of the structures you need, forcing you to expand early and explore the map to find areas where you can set up secondary bases.

The resource gathering is a particularly nice touch. Rather than send out a harvester of some kind to mine a resource, you simply generate supply points. The more supply depots you have, the more supply you generate, but of course you only have a limited number of expansion modules, so if you build lots of supply pads you may find yourself unable to build a vehicle factory or a barracks. This encourages early-game expansion and exploration. The supply mechanic isn't new, originating as it did in the Command and Conquer: Generals expansion Zero Hour many years earlier, but Halo Wars makes it really work as part of the mechanics.

You can build an extensive army consisting of infantry, aircraft, tanks, anti-air batteries and other units. The elite Spartan super-soldiers can't be built (at least in campaign mode) but can join the fray as special elite units for certain missions.

For a supposedly "cut-down" RTS, Halo Wars surprisingly enjoyable even for an experienced PC strategy gamer. The unit variety isn't the most extensive, but the focus on a smaller roster helps streamline the game and make it more enjoyable. It also allows for battles to be fought faster and more furiously, rather than you agonising of which of several very slightly different units to build.

The campaign is enjoyable, with a fairly straightforward SF story. As the game is set twenty years before the original Halo: Combat Evolved, no prior knowledge of the franchise is needed, making it a perfect jumping-on point ahead of the release of the upcoming Halo Master Chief Collection on PC (which will bring Halo: Reach, Halo: ODST, Halo 3 and Halo 4 to PC for the first time, alongside upgraded versions of the original Halo and Halo 2).

The game does have several problems, however. The game doesn't use many "standard" RTS controls, instead forcibly mapping camera controls to WASD and not allowing you to reassign them. This means many standard RTS controls - A for attack-move, S for stop - are not available in the game. The game is also on the short side: I polished off all 15 campaign missions in about 11 hours. The game feels like it really needs a Covenant campaign to make the game a more worthwhile single-player experience, and indeed the story feels a bit opaque at times, like we were supposed to be getting more information about the Covenant version of events but at some point this was cut.

The other problem is that the game can't help but feel a little familiar, particularly in missions fighting the organic Flood where you have to destroy their living technology. This feels very reminiscent of fighting both the Zerg in StarCraft and the Tyranids in Dawn of War.

Still, given it is now available at a very reasonable price, Halo Wars (****) succeeds as a short, focused and fun real-time strategy game which doesn't make too many concessions to its console origins. It's available now on Steam.
Posted by Adam Whitehead at 22:06