STAR WARS: KNIGHTS OF THE OLD REPUBLIC movie in development at Lucasfilm

Buzzfeed has scooped the news that Lucasfilm are developing a script based on the critically-acclaimed and massive-selling 2003 video game Star Wars: Knights of the Old Republic, developed by BioWare. 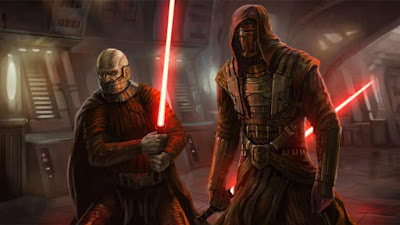 Screenwriter Laeta Kalogridis (Shutter Island, Altered Carbon, er, Terminator: Genisys) is reportedly developing a film trilogy based on the game and has almost completed the script for the first film in the series.

Set over 4,000 years before the events of the Star Wars prequel trilogy, the game tells the story of an amnesiac Jedi who awakens on a starship above the planet Taris that is under attack by Darth Malak's forces. The galaxy at this time is engaged in a civil war between open Jedi forces, led by the Jedi Council, and Sith forces under Darth Malak, former apprentice to the slain Darth Revan. The Republic is weak and divided between the two factions and a strong neutral faction.

It is also unclear if Kalogridis is developing the film as the one to be produced and directed by David Benioff and D.B. Weiss for release in 2022, or for Rian Johnson's trilogy project, or as a speculative script unrelated to the above (possibly for Disney+?). It should be noted that Lucasfilm have been adamant that the post-Rise of Skywalker movies will take place in a completely different part of the Star Wars canon in both time and place, which this would certainly qualify for.

If the rumour is true, Laeta Kalogridis will become the first woman to write for a Star Wars film since Leigh Brackett wrote the first draft of the script for The Empire Strikes Back in the late 1970s.

Knights of the Old Republic is comfortably one of the most popular Star Wars stories and projects of all time, often ranking high on lists of the most popular instalments of the Star Wars franchise. BioWare have frequently discussed making a Knights of the Old Republic III, the last time as recently as completing work on Mass Effect 4 and moving that team over to Anthem, but reportedly their publisher Electronic Arts are sceptical of the appeal of a single-player focused RPG with no microtransactions or multiplayer element.

Lucasfilm have neither confirmed nor denied the story as yet.
Posted by Adam Whitehead at 23:47

I would rephrase that along these lines:
'...Electronic Arts is sceptical of the financial return of a game with no microtransactions ...'

- its not just Genisys that was problematic. Those tortured interchanges between Takeshi and Reileen in the final episodes were kick-me-in-head painful.

Very exciting! It's an incredibly compelling story with a lot of potential (KOTOR and KOTOR 2 anyway, SWTOR didn't work for me as a story telling device).

Going off memory but pretty sure it was "Canderous" Ordo not Cancerous Ordo :P. Spellcheck amiright?