News has sadly broken that Star Wars actor Peter Mayhew has passed away at the age of 74. 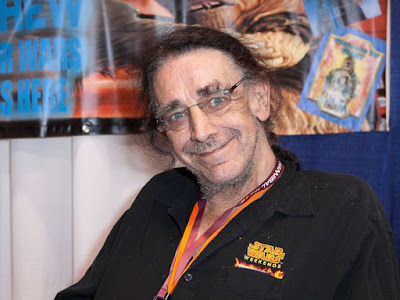 Mayhew was born in 1944 in London and was noted for his exceptional height, peaking at 7 foot, 3 inches. His exceptional height attracted the attention of casting agents, who cast him in the role of the minotaur in Sinbad and the Eye of the Tiger in 1976. He was put forward for a role in George Lucas's Star Wars; originally Lucas had cast David Prowse as Chewbacca but had second thoughts and decided that Prowse would make a better Darth Vader. Mayhew noted that he was cast based almost entirely on his height.

Mayhew played Chewbacca solo in four Star Wars movies: Star Wars (1977, later retitled A New Hope), The Empire Strikes Back (1980), Return of the Jedi (1983) and Revenge of the Sith (2005). He also reprised the role for several TV guest appearances and public appearances. In 2015 he returned to the role for The Force Awakens, but ill health prevented him from playing Chewbacca full-time. Instead, Mayhew played the role in scenes with Chewbacca sitting down or standing still, whilst Finnish actor Joonas Suotamo played the role in action sequences.

After the release of The Force Awakens, Mayhew announced his retirement from the role and gave his blessing for Suotamo to take over the role full-time. Suotamo has since reprised the role in The Last Jedi (2017), Solo: A Star Wars Story (2018) and The Rise of Skywalker (2019). Suotamo sought Mayhew's advice when taking over the role full-time in The Last Jedi, leading to Mayhew being credited as "Chewbacca Consultant" on the film.

Despite having no audible dialogue in the films, Chewbacca became a firm fan-favourite for his personality and discernible sense of humour. Chewbacca's inability to talk normally proved challenging for the writers of the Star Wars novels, ultimately leading to the (wildly unpopular) decision to kill off the character (albeit heroically) in the novel Vector Prime. The decision was so unpopular that the author, R.A. Salvatore, received death threats. When Disney took over the Star Wars franchise in 2012, Chewbacca's death was given as the primary reason why the novels would be ignored and the canon rebooted.

Mayhew appeared in several non-Star Wars-related movies over the years and also used his celebrity to promote charitable causes.

Mayhew is sadly the third actor from the core Star Wars cast to pass away, following Kenny Baker (R2-D2) in 2016 and Carrie Fisher (Princess Leia) in 2016.
Posted by Adam Whitehead at 00:30