CBS has released the first teaser trailer for Star Trek: Picard. And immediately withdrawn it. They have released a nice poster though: 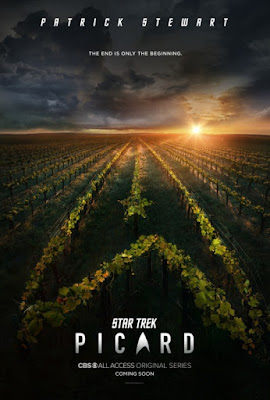 The story follows a retired Admiral Jean-Luc Picard (Sir Patrick Stewart) eighteen years after the events of Star Trek: Nemesis and fifteen years after he led a huge rescue mission with unforeseen consequences that led to Picard quitting Starfleet. Even Starfleet are uncertain why he did this. Since then Picard has been apparently working at his family vineyard in France (last seen in the Star Trek: The Next Generation episode Family). Circumstances bring Picard back into the Starfleet fold.

According to some reports, the rescue mission was an attempt by the Federation to help the people of the Romulan Empire due to the obliteration of the Romulan homeworld (as noted in the events of the 2009 movie Star Trek), the first time the events of the alternate "Abramsverse" or "Kelvin Timeline" have had a major impact on the Prime Timeline of the core Star Trek universe.

In a particularly geeky detail, this suggests that the official Star Trek timeline will have to be rewritten; the current timeline has the events of Star Trek: Nemesis taking place in 2379 whilst the destruction of Romulus is listed as occurring in 2387. The plot summary suggests that only three years elapse between the two events, presumably putting the destruction of Romulus in 2382 and setting this new series in 2400, bringing Star Trek into the 25th Century (or almost, depending on how you measure it).

Star Trek: Picard started shooting last month and will consist of 10 episodes, at least two of which will be directed by Stewart's old running-mate Jonathan Frakes. The Pulitzer and Hugo Award-winning author Michael Chabon is working on the series as a producer and writer.

The series is expected to debut on CBS All Access in the United States in late 2019.

In surprising news, the series will air on Amazon Prime worldwide, rather than Netflix (who currently air Star Trek: Discovery).

UPDATE: CBS have apparently removed the trailer they themselves put on YouTube. Curious.
Posted by Adam Whitehead at 15:32