BBC options Michael Moorcock's HISTORY OF THE RUNESTAFF for television

This actually happened back in March, but I missed it at the time. The BBC has optioned Michael Moorcock's History of the Runestaff fantasy series for television. 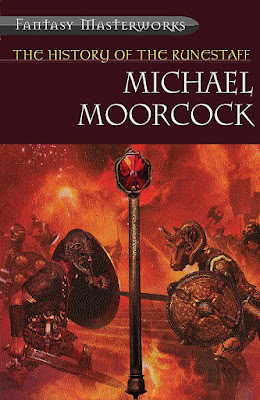 The four-volume series consists of the novels The Jewel in the Skull (1967), The Mad God's Amulet (1968), The Sword of the Dawn (1968) and The Runestaff (1969). Set in a far future version of Europe, the story follows the adventures of German resistance fighter Dorian Hawkmoon as he seeks to destroy the Great Empire of Granbretan (a fascistic version of Britain), which is trying to conquer the continent.

The four-novel series was later expanded by The Chronicles of Castle Brass, a sequel trilogy. Moorcock also tied the sequence into his much larger Eternal Champion meta-saga, with Hawkmooon as another aspect of the Eternal Champion figure.

Steve Thompson, who has written for Sherlock and Doctor Who, is spearheading the project for BBC Studios.
Posted by Adam Whitehead at 16:45

Email ThisBlogThis!Share to TwitterShare to FacebookShare to Pinterest
Labels: bbc, michael moorcock, news, the eternal champion, the history of the runestaff

Great to see Moorcock making it to TV never liked the film version the The Final Program, hoping BBC get it right

I have read a few opinions claiming that while Moorcock's stories are important in the development of the fantasy genre they are not as enjoyable as recent fantasy novels written for todays more cultivated fans and this would reduce the chances of a Moorcock based tv series becoming a succeess. It is easy to see some merit in this view however, I believe any such challenges encountered can be easily overcome with a good production team and then you would have an offering where the very names of the Moorcock charactors would immediately resonate in the minds any 40+ fantasy fan or curious youtube user of any age. When I was in my teens in the seventies there was not a lot of choice in the sword and sorcery fantasy genre therefore, unlike todays crowded marketplace more of the published stories were likely to be read, reconised and remembered.