The Klingon War is over and the USS Discovery is poised to begin a new mission of discovery and exploration. But a fresh crisis erupts when unusually powerful signals are detected originating from distant parts of the galaxy. Captain Christopher Pike of the USS Enterprise takes command of the Discovery on a temporary assignment to investigate the source of the signals, taking the Discovery and her crew into some very strange places indeed. 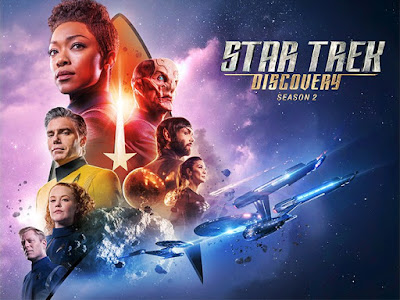 The first season of Star Trek: Discovery was a mixed bag. It had utterly spectacular production values, a very solid cast and a willingness to do things differently to any Star Trek series that came before it. It also had muddled storytelling and characterisation, and sometimes overcame narrative roadblocks by simply blasting through them and damning logic, a similar approach to some modern episodes of Doctor Who (and, in its latter seasons, Game of Thrones). Discovery at its best was fun enough that you didn't care about the lack of coherence in the storytelling, but at its worst it was wince-inducingly contrived and trying to be dark for the sake of it. The fact that it was still the third-best opening season of a Star Trek show (after the original show and, arguably, Deep Space Nine) says rather more about how poor most first seasons of 1980s and 1990s series were then about Discovery in particular.

The second season is a moderate, but only a moderate, improvement. It has a much more charismatic and interesting captain in the form of Pike, played with absolutely stellar conviction by Anson Mount (who is probably thanking his lucky stars that Inhumans was cancelled). Mount plays Pike as a captain with sound judgement, ready to take risks but not crazy ones, and who absolutely trusts his crew rather than second-guessing them all the time. Ethan Peck also joins the cast as a younger version of Mr. Spock, a more rigid one suppressing his human side than the character we know from the original franchise. Peck's performance is excellent, overcoming the usual "Spock problem" of having to unleash lots of exposition and technobabble through his dramatic presence. He is probably a better Spock than Zachary Quinto (as solid as he was in the neo-Trek movies), and a fine heir to Leonard Nimoy.

The second season also dials back on the Klingon storyline, only touching base with it in a few episodes, and instead focuses on a fresh mystery, a scientific conundrum which our heroes have to solve through investigation and exploration, concepts much truer to the Star Trek mythos.

Cumulatively, these changes are all for the better. The show feels more like Star Trek, the cast is working better together and we get more of an exploration of the side and background characters, making the cast feel more cohesive as a team.

However, the show still manages to sabotage itself. The plotting and main story arc is still muddled and somewhat confusing, and the writers prefer to blast through under-developed plot points in a blaze of technobabble and hoping for the best. This isn't exactly new to Star Trek (the same problem bogged down Voyager for almost its entire run) but it feels more egregious in the modern TV age. Characterisation for the regulars is mixed, with Michael Burnham still feeling a little too under-developed as our key protagonist but the scripts getting into the motivations and psyches of characters like Stamets and Saru in a more interesting fashion. Tilly, a highlight of Season 1, does feel a little too readily used as comic relief and like an over-indulged child in several episodes, which is a disservice to both the character and actress.

The plotting problems culminate at the end of the season in two episodes which feel contrived at best, with the writers more interested in resolving fan questions about canon rather than organically developing a logical conclusion to this story arc. It's not helped that the final big space battle is a confusing mess of beams and explosions that even Michael Bay would find nonsensical.

The second season of Star Trek: Discovery (***½) is therefore a bit variable in quality: outstanding sets (especially the recreation of the Enterprise bridge), actors and effects, but confused storytelling, continuity and characterisation. The way the story falls out does make sense (even if the route there doesn't always) and it does leave the series with a very interesting new setup to explore in Season 3, but it does feel a little frustrating that show still isn't hitting the high points of the shows that came before it, or even those of the other big space opera series on the air, The Expanse, which is comprehensively owning space at the moment. Discovery is available to watch on CBS All Access in the United States and Netflix in much of the rest of the world.
Posted by Adam Whitehead at 17:27

Speaking of Expanse, you ever gonna review the third season?

Thanks for the reviews. I don't feel as bad about not subscribing to CBS All Access now.

Have you watched The Orville? I recently finished watching season 2 and it got even better, way more fun and interesting than the first season of Discovery (tho I haven't started with season 2 yet, season 1 was bad enough that it's not a priority).