Marneus Augustus Calgar is the Chapter Master of the Ultramarines, one of the most respected, feared and legendary warriors in the Imperium of Man. Fifty years after the defeat of Hive Fleet Behemoth, the domain of Ultramar is still beset by enemies but is held secure by the Imperium's forces, secure enough for Calgar to embark on a goodwill tour of the remote, outlying colony of Zalidar. But Calgar's arrival coincides with that of a full-scale ork invasion force. Calgar's transport is shot down and he and a bare handful of Space Marines have to make a hazardous journey to where the capital, Zalathras, withstands siege. 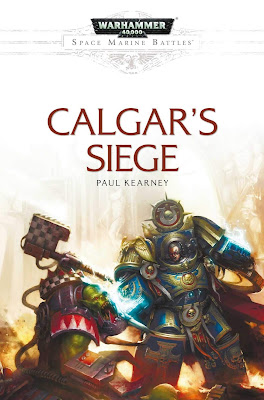 Paul Kearney is one of the single finest writers working in the SFF field today, adept at telling modern fables with a light touch (such as A Different Kingdom and The Wolf in the Attic) and epic stories of war and redemption (such as The Macht Trilogy and The Monarchies of God). Alas, he is also one of the perennially underread, despite the near-blanket critical acclaim that has accompanied his career to date.

Calgar's Siege is Kearney's second Warhammer 40,000 novel, although the first published. The first, Umbra Sumus, was put on hold due to a copyright dispute between Games Workshop and Sherrilyn Kenyon over the use of the name "Dark Hunters" for a Space Marine Chapter and still hasn't appeared.

Calgar's Siege, fortunately, has made to print and has been worth the wait (also, no foreknowledge of the WH40K setting is required). The marriage of Kearney's formidable skills at storytelling, characterisation and battle scenes (Kearney is, hands down, modern SFF's best writer at combat scenes) with the over-the-top, technicolour, occasionally crazed Warhammer 40,000 setting is one made in heaven. Kearney brings the setting to vivid life as we follow the defence of the hive city of Zalathras against an onslaught of orks.

The action switches between several groups of characters, including the beleaguered planetary administrator struggling to stay on top of the conflict from his tower to the rogue trader Morcault and his crew on the starship Mayfly, who first get wind of the impending invasion and then fly air support and transport during the siege. But the focus is firmly on Marneus Calgar, one of the most legendary characters in the modern 40K canon, as he leads a small number of Space Marines into battle. One of the fun things about the book is seeing Calgar, who can usually summon armies in the hundreds of thousands and vast space armadas in the blink of an eye, deal with just being a common grunt on the ground during a particularly gruelling war in jungle terrain.

Kearney is at home here, mixing up battle scenes with quieter character moments and orchestrating the entire battle with a fine conductor's hand. He is able to craft distinct characters from each Space Marine and many of the ordinary humans defending the planet and give each one a reasonable arc.

There are some minor issues. Kearney's skills at characterisation tend towards moral ambiguity and doubt: heroes who are often heroes because of their flaws and how they overcome them. There isn't much moral ambiguity in Space Marines, who are righteous, determined and genetically engineered towards supreme confidence, although Kearney does nevertheless succeed in making them distinct characters. The ordinary human characters are more conflicted and more interesting as a result. This is more a feature (or bug) of the setting than Kearney's writing and he manages to overcome it well.

More traditional a problem for Kearney, a writer who has never outstayed his welcome, is that the story sometimes feels a bit too streamlined, and more scenes of how the conflict is affecting ordinary citizens may have been welcome to establish the background setting more firmly.

Ultimately, Calgar's Siege (****) is Paul Kearney doing what he does best, crafting intricate stories of compelling characters surviving in the midst of war, chaos and adversity. It's not his best book, nor the best WH40K novel, but it is a strong SFF war novel. It is the first in a trilogy, followed by Calgar's Fury (2017) and the forthcoming Calgar's Reckoning. It is available now in the UK and USA.
Posted by Adam Whitehead at 09:35

Interesting question: what is the best W40k novel?

Doubtless an Eisenhorn or Ravenor book would qualify, maybe one of Gaunt's Ghosts.

You should try to find a copy of Umbra Sumus on the internet because it's a really interesting Space Marine story. I know pirating is bad but in this case, you really can't get the book any other way. What makes Umbra Sumus so interesting is that like Calgar's Siege it turns the humans AND Space Marines into multi-faceted characters but it also had one of the best portrayals of Eldar in BL I can think of. I wish Paul Kearney would write more WH40K-stories.