Lost Heaven, 1930. In the wake of the Wall Street Crash, the American economy is tanking and honest cab drivers like Tommy Angelo find themselves barely able to scrape by. Tommy finds himself helping two gangsters escape from a crime scene; when he gets them to safety, they ask him to work for them. From then on, Tom's life gets richer and a lot more interesting...but also a lot more dangerous. 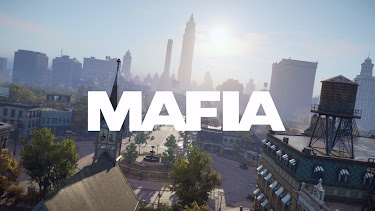 Mafia, originally released in 2002, is one of my favourite video games of all time. It came out in the wake of Grand Theft Auto III but rather than replicate it's open-world design, mixing a central storyline with side-quests and optional activities, it instead focused on telling a linear, intense story of crime, redemption and loss. The game spans a period of eight years and chronicles how Tommy becomes a respected (and feared) member of the local community. He enjoys the camaraderie of fighting alongside his fellow mobsters and becoming a member of "the family," but he has a conscience. When civilians are killed in the crossfire, he starts to regret his choices, and when he becomes a husband and father he realises what the risks are. His bromantic view of life in the family becomes replaced by the cold, hard reality of the fact that they are criminals and murderers.

For 2002 this was advanced stuff; the same year, Vice City opted for letting its players live out their most insanely violent, gun-spitting, coke-drenched Scarface fantasies and felt like a cartoon by comparison. An entertaining cartoon, sure, but still a decidedly unrealistic game. Mafia was much more interested in realism: you can only take a few hits without dying, crashing your car too severely will also kill you and the police will get on your tail for running red lights and breaking the speed limit. You can even run out of petrol if you're not careful. The cars are all weighty and feel massive, taking ages to build up speed and with breaking distances measured in hundreds of feet. Mafia's not entirely devoted to realism - a few missions see frankly preposterous numbers of enemies rushing to take you on, because it's still a video game - but it was certainly the cold bucket of water compared to GTA's depiction of crime. It's interesting how influential Mafia was; later GTA games (particularly Grand Theft Auto IV, which borrows a ton of ideas from Mafia) definitely feel more like Mafia than GTA3 or Vice City. 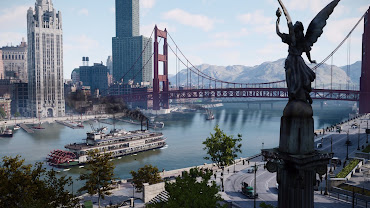 Now the game has been remade by Hanger 13, the developer who took over the franchise from Bohemian Interactive (who also made the disappointing Mafia II). Hanger 13's own Mafia III was so-so, some good ideas compromised by all the tedious open-world jank the publisher had blatantly forced on the game to make it a Grand Theft Auto clone. The fear was they'd do the same to Mafia: Definitive Edition, having the missions trigger when you go to Salieri's restaurant but introducing a ton of new content to make exploring the city worthwhile at the expense of slowing the narrative down. I'm genuinely surprised they haven't done this, instead replicating the original structure of having you move directly from one mission to the next in a linear fashion. The separate "Free Ride" mode remains intact, allowing you to explore the city off your own back if you wish (although there isn't much to do).

The shooting has been upgraded a bit, with the introduction of Mafia III's cover system, but it feels a bit weightless compared to the original game. In particular the machine gun has become decidedly less effective than it used to be and the game's tracking of headshots is variable. The driving hasn't been upgraded at all: these cars are still massive, take ages to get up to speed and cornering becomes a major skill. This is a bold choice, although the developers have added motorbikes and some ahistorical later, nippier cars for optional use. Fortunately there's now a lot more granularity in the difficulty. You can set it so the police ignore you for breaking the speed limit or running red lights, and cars no longer need to be fuelled up. 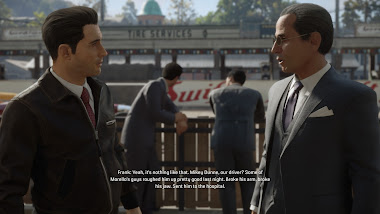 The story and missions remain the same, although they've been tightened up in places. Tommy has a few more interactions with his girlfriend (and later wife) and the slightly embarrassing sex scene from the original (all comical bumping polygons and dead staring eyes) has been mercifully exorcised in favour of something more tasteful. The script has also been rewritten to be more concise and sharper, leading to one of the game's most disappointing aspects: the revoicing of all the game's dialogue.

This is fine in most cases, with the new actors turning in solid performances. The biggest problem is with Tommy himself. His original voice actor was outstanding, really selling the idea of Tommy as a completely ordinary guy who's wandered into this life and isn't sure about it at all, coming across as believably nervous and even frightened in his first few brushes with "the lifestyle" before he gets more used to it. Tommy in the revised edition has a much more generic voice actor and is a bruiser who is prepared to use his fists and guns right from the very off, with other characters even expressing their surprise at his willingness to use physical violence. This is an odd move, as it removes what differentiated Tommy from other video game antagonists (including Vito and Lincoln in the sequels) and makes him both far more predictable and much less sympathetic. It doesn't help that the new Tommy character model doesn't resemble the original at all (weirdly, as pretty much everyone else gets a brand new model that resembles the original quite closely, just much more detailed) and again looks much more generic. 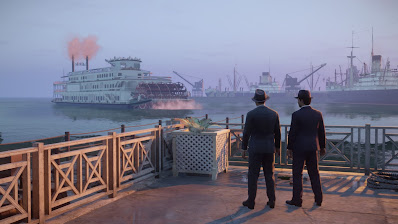 Graphically, the game is fine, and certainly much better than it looked in 2002, but not as good as you'd expect a brand new game in 2020. The environments look decent and the main character models are solid (especially in cutscenes) but most of the random pedestrians on the street are distinctly plastic-looking and the city buildings have a really weird LOD issue, where they load up the more detailed textures far later than you'd expect, resulting in some distinctly low-res skyscrapers when you're not that far away from them. The game also has some of the same weird physics artefacts from the original (such as some street signs stopping your car in its tracks if you crash it them, but other, near-identical ones being knocked flying). Mafia III was rightfully criticised for being a 2016 game that looked like a 2010 game, but Mafia: Definitive Edition is a 2002 game remade in a 2016 engine that looks like a 2012 game on a good day. The game doesn't look hideous and it gets the job done, but it does feel a bit low-budget.

The original game's most controversial mission, the ludicrously tough motor race, is present and correct, and hysterically appears to be based on the original build version from 2002, not the patch released a few months later which added variable sub-difficulty levels, opened up a cheesy shortcut and even allowed you to skip the mission if you failed it a few times in a row. The 2020 version of the race is lacking any of these improvements and is utterly merciless on anything other than Easy difficulty. Respect to Hanger 13 for retaining the integrity of the original, a bold but (going by early social media reactions) controversial move.

Mafia: Definitive Edition (***½) spruces up an all-time classic into something more approachable and more playable in 2020. It isn't a flawless remake, however. Graphically, it's not where  you'd expect a modern game to be, and the shooting is a bit of a mixed bag. The game feels a bit like it's fallen between two stools: it's changed enough so as not to be a completely 100% accurate remake but it's not changed enough to create an entirely new game sitting on top of the original's structure. As it stands it feels like a compromise, one that's playable and interesting enough, but some of the original magic has been lost along the way. It's also questionable if even the half-price launch point is reasonable considering that a single playthrough of the game will likely not take much more than 12 hours or so. The game is available now on PC, PlayStation 4 and Xbox One.

Email ThisBlogThis!Share to TwitterShare to FacebookShare to Pinterest
Labels: mafia