Netflix are developing a fresh TV version of Conan the Barbarian. Amazon were developing a project two years ago with Ryan Condal, but dropped it after greenlighting both Lord of the Rings: The Second Age and The Wheel of Time. 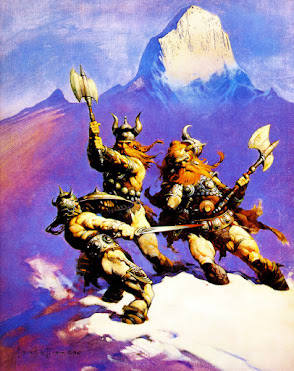 The new project is much more nebulous than the Condal idea, which was to directly adapt Robert E. Howard's stories in chronological order. The three previous movies based on the character - Conan the Barbarian (1982) and Conan the Destroyer (1984), starring Arnold Schwarzenegger, and the rebooted Conan the Barbarian (2011) starring Jason Momoa - and a short-lived 1997 live-action TV show used the character and took some inspiration from Howard's stories but created new situations and stories.

Netflix are developing a slate of science fiction and fantasy properties, including a live-action version of SF anime series Cowboy Bebop and a rebooted adaptation of C.S. Lewis's Chronicles of Narnia books. They are also shooting a second season of The Witcher, based on Andrzej Sapkowski's books.

Conan the Barbarian has seen a renewed lease of life in the last few years, with successful board games, video games and new comic books based on the character being released to a mostly positive reception.

Ryan Condal and his team are no longer available to helm the series, as they are instead in charge of the greenlit Game of Thrones spin-off House of the Dragon at HBO, which is currently deep in pre-production and casting.

I'm very surprised that Conan is getting traction in an era of #MeToo and #Cancel culture. Certainly casting will have to deviate from the books to include more strong women and people of color in positive roles. Some consider Robert E. Howard to be a racist or white supremacist (https://en.wikipedia.org/wiki/Character_of_Robert_E._Howard), but he is not as explicitly so as his friend H.P. Lovecraft.

Lovecraft was a racist above and beyond the call of duty even for the 1920s/1930s. Howard was not (although he would be considered so by the standards of today), and his views seemed to moderate over time, particularly in the last few years of his life when he seemed to reject racism more harshly. If anything, his correspondence with Lovecraft seems to have made him realise the corroding effect of racism.

As for having more prominent black characters, that shouldn't be too hard. An obvious change would be to make Bêlit black or Middle-Eastern, rather than a randomly white overlord of black minions (despite being from a country that is an analogue to Arabia and Mesopotamia). And Conan spends some time adventuring in countries like Shem and Stygia where including other ethnic groups should be easily compatible with the lore.