Whilst there's been lots of news and rumours about Amazon's two big epic fantasy TV series-in-the-planning, a Lord of the Rings prequel show and an adaptation of Robert Jordan's Wheel of Time, not much has been said about their announced Conan the Barbarian show, leading some to wonder if it had been put on the backburner. Not so, with the project stepping up active development. 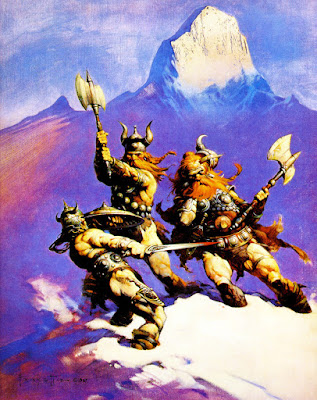 Frank Frazetta's artwork depicting the events of The Frost-Giant's Daughter.

Colony co-creator Ryan Condal is working on the project as producer, writer and showrunner. With Colony recently cancelled after three seasons, Condal is now focusing his attention fully on Conan. Encouragingly, he has confirmed that the series will try the unusual tactic of actually adapting Robert E. Howard's short stories rather than simply putting Conan in a new situation, the tactic employed by all three of the feature films released about the character.

The show's pilot episode will adapt The Frost-Giant's Daughter, chronologically the earliest story of Conan's life. In this story, the teenage Conan, not long peacefully departed from his homeland of Cimmeria, is confronted by a spectral creature who lures him into an ambush.

The ambition of the series is to apparently adapt all of the Howard Conan stories, interspersed with new material forming a serial element to better connect the stories together (this will also be necessary as there are only 26 Howard short stories, and presumably the ambition will be for the show to last longer than 26 episodes). The ultimate goal is to cover all of Conan's life up to his reign as King of Aquilonia.
Posted by Adam Whitehead at 12:31

Great idea but I'm not sure they will be able to adapt directly from the short stories. Most of them shows Conan as a pretty brutal...well, barbarian. Great on paper but not so sure about that on screen.

I drink to this idea.

Lordy, but I hope this is all true. Been reading and watching everything Conan since the early 70's. If done right - finally! - Then this would truly be epic.

Unfortunately Amazon have passed on the project. They're trying to find it a home elsewhere.