Rafe Judkins, the producer-writer-showrunner of Amazon's Wheel of Time TV series, has shared a picture of the title screen of his script, confirming that the first episode will be called Leavetaking. 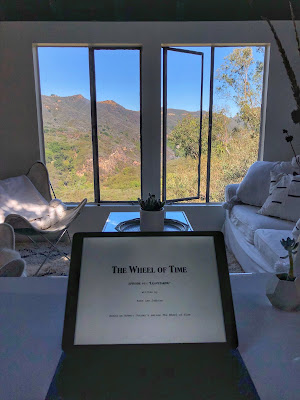 This is interesting, as Leavetaking is the name of the tenth chapter in The Eye of the World, the first novel in the Wheel of Time series, suggesting that this episode may cover all of the events up to the end of this chapter (in which Rand al'Thor and his band of friends depart the village of Emond's Field). This seems a lot to pack into one episode: Hollywood wisdom is that 100 pages of text in a paperback novel equates to one hour of screen time, as exemplified by The Lord of the Rings (1,100 pages in paperback, 11 hours long in the Extended Edition of the trilogy). Leavetaking concludes on page 148 of the paperback edition of the novel.

This is even more challenging when you consider that this episode will also presumably include the opening prologue set at the end of the Age of Legends. When Red Eagle created an amateur pilot episode (albeit one starring Billy Zane) based on this sequence, it ran to 25 minutes by itself.

It is possible that the episodes will not be limited to one hour apiece, and it is also possible that Judkins has made the elementary error fans had been hoping he wouldn't: devoting an entire first season of 10 or 12 episodes to The Eye of the World by itself. Consisting of 14 novels, The Wheel of Time really needs to get two books adapted per season to wrap things up in a reasonable 7 seasons, and starting out with the attitude of, "Well, let's see how it goes," will only cause bigger problems later on. An alternative solution is that Judkins and Amazon envision the first episode as being a double-length affair.

The other curiosity is the title of the episode: Leavetaking is something of a prosaic name. Given the inventiveness of the chapter titles, using them for episode titles is a no-brainer, but in this sequence titles like Dragonmount, Winternight, Strangers or Tellings of the Wheel would be superior choices.

As yet, Amazon has not formally greenlit the Wheel of Time TV series. Assuming they like the pilot script, we might see the show in 2020 or 2021.
Posted by Adam Whitehead at 19:46

If ever there was a series that would benefit from 'The Princess Bride Treatment' aka a severe culling of extraneous material, it is The Wheel Of Time (or Wheel of Cheese as my sisters calls it).

Wheel of Time is considerably less dense than Lord of the Rings, so I suspect a page of Tolkien is worth 1.5 pages of Jordan. Maybe even 2 pages of the middle novels.

I think a variable pacing for the series would go over well. I don't think the 100 pages per hour thing completely applies to Robert Jordan's books, because they're exceedingly wordy and perhaps overly descriptive at times. There's a lot of character bloat, a lot of nonverbal first person introspection, and eventually an entire unnecessary flashback novel as well.

A lot happened in the first novel, and because it's so self contained - they introduce the bad guys, have a hero's journey, then defeat the bad guys - it sounds like a good idea to make that whole thing the first season.

As for the first episode being quite a number of pages, I think they'll be okay. It's been a while since I read the book... 20 years? So in my mind, they just have to -

- show Rand heading into town with Tam, and see the creepy myrrdral behind them. That should take a minute tops.

- Rand can meet up with his local friends, Matt, Perrin, and Egwene, and maybe the older Nynaeve. That should only take a few minutes. They can have Nynaeve tug her braid and Egwene smooth her skirt over her hip to get that out of the way.

- Next, the group can meet Thom the gleeman, and watch him for a bit. That should take a few minutes.

- Reaction shots as we meet Moiraine and Lan, then meeting them and learning a bit about the Aes Sedai, Warders, and Egwene's test. Maybe a quick mention about Moiraine being a Blue, and someone giving a quick aside that they're glad it wasn't a Red, and perhaps a bit of why. That should be 10 or 15 minutes.

- Trolloc Attack! This can basically be padded to fit whatever time remains. Shots where lots of people get overwhelmed, but Lan does well, the kids gang up together, Moiraine uses the One Power, and maybe Tam does okay.

- Finally, they set off to the big city, maybe ending on a teaser that they're being watched, either by a hidden myrrdral or maybe a shot of 'The Dark One'.

That doesn't seem too bad! We won't care about most of the people in Rand's hometown until a number of books later, and there's a lot of exposition that we don't need right away as well. The second episode can montage them getting to the city in different ways (I think they got separated, right?), getting to that one tavern, and meeting Min, Loial, Elaine, and maybe Elaine's brothers real quick?

So, this news actually makes me feel quite hopeful for the series!

Later books can be consolidated quite a bit later on. I remember quite a bit happening through book 5, but book 6 was Rand stuck in a box, and maybe that could be skipped altogether. Certainly his portions of the book, which are mostly him being abused and trying and failing to escape could be shortened to a few minutes of each episode, as a reminder of why everyone's trying to save him.

They might be able to mix some of the books up as well. I can't remember which book it is, but doesn't Rand sit out one whole book, only to appear at the end and take down the fortress Tear? And another one where Matt is missing, having had a stone wall fall on him in the previous book, only to appear alive and well two books later? That doesn't seem fair to the actors, to have to sit out an entire season or so. Some of the books are already split up into 5 or 6 (or more?) points of view anyway, so maybe after they get through the first book, they can figure out a way to check in with characters periodically without resorting to creating too much new content.

Don't forget you can see a dress or a braid being tugged in seconds on the screen, not the 4 pages they take Jordan to do the same thing ;)

Not a script writer but for me, I would spread the prologue throughout the season/episodes covering the eye of the world. The final reveal of Eye of the world is that the dragon is reborn and I would want the viewer to be aware within that same episode that Lews killed his friends, family and committed suicide.

As for the episode title suggesting where we're going to leave the action - fantastic! We all agree that if this is going to work on TV it needs to get through the book at a good pace and to cut some elements of the story. Like Game of Thrones, the middle books offer more to be cut. If we're following the HBO model of the big action in the penultimate episode then the final episode could cover the horn being stolen and setting off in pursuit?