HBO has greenlit a spin-off TV movie from its critically-acclaimed dark Western TV series, Deadwood, which aired for three seasons between 2004 and 2006 before being prematurely cancelled. 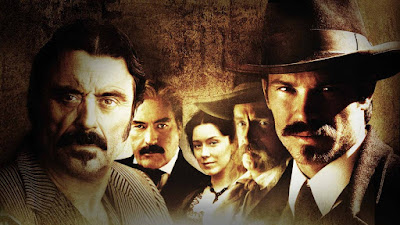 HBO has been promising a film to wrap up the story almost ever since, but has been stymied by the schedules of the actors of the show, almost all of whom have gone on to be regulars on other successful shows (most notably Timothy Olyphant on Justified and Ian McShane on American Gods). But a gap in the schedules has opened and with creator/writer David Milch and director Daniel Minahan on board, HBO are proceeding forwards with the project, which will shoot in the autumn to premiere in the Spring of 2019.

So far it's not been confirmed precisely which actors will be returning.
Posted by Adam Whitehead at 17:59

Now .. it'is.. CARNIVALE TIME!!!! Do it HBO, it's your biggest sin after all, redeem yourselves!