Harry Potter and the Prisoner of Azkaban

After directing and releasing the first two Harry Potter movies in under three years, The Philosopher's Stone and The Chamber of Secrets, director Chris Columbus took a back seat and Warner Brothers made the bold choice of hiring Mexican director Alfonso Cuaron to helm the third movie in the series. Known for edgy, experimental and realist work, the move paid off with Harry Potter and the Prisoner of Azkaban being an enormous financial hit and the first major critical success in the series. 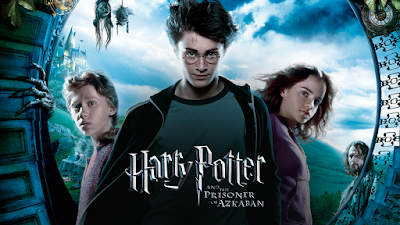 Straight away, it's clear we're in different territory. The Prisoner of Azkaban has more handheld and realistic camera shots than the previous two movies, which were much more safe and traditional. Cuaron shows a strong affinity for effects work (which would set him in good stead for his later movie Gravity, which would be filmed almost entirely in front of green and blue screens), for story and for character. He's an excellent director of actors and elicits terrific performances from both the young child stars and the increasingly impressive galaxy of well-known supporting actors, this time around including the impeccable David Thewlis, Gary Oldman, Emma Thompson and Michael Gambon (taking over from the late, great Richard Harris as Dumbledore).

Much of the film is also shot on location, whilst the first two movies only used a few location shots and filmed almost everything else in the studio. This immediately results in a much more realistic feel to the film and grounds the film more effectively. There is also greater attention to continuity, with Hogwarts now feeling like a real place with the location of each scene and piece of the action effectively communicated.

However, the film does suffer in pacing. The Prisoner of Azkaban, as a book, is almost half again the length of the previous two books in the series with many more subplots and characters. The film makes an attempt to fit the whole book into the movie, but a lot of extraneous material had to be cut out in rewrites (such Harry's tentative interest in fellow student Cho Chang, which was moved to the following film) and then edits. This problem is increased by the fact that Chamber of Secrets (the longest film in the series) was deemed too long for a children's movie, so Prisoner is a full twenty minutes shorter with even more story cut out as a result. The result is a great story but one that feels a bit too chopped around and bitty in pacing. This odd structuring of the story also means that a key subplot, which relies on the viewer picking up on odd clues from earlier in the film, may not be as apparent as it should be.

Still, Harry Potter and the Prisoner of Azkaban (****) is definitely an immense improvement on the first two movies in the series and is a by turns funny, dark and exciting family adventure film, with Alfonso Cuaron's direction bringing out the best from the source material and the resources at his command. The movie is available now in the UK (DVD, Blu-Ray) and USA (DVD, Blu-Ray) as part of the Complete Harry Potter Movie Collection.
Posted by Adam Whitehead at 19:27