The city of Harran has been overrun by a mysterious virus which transforms those it effects into feral, deranged monsters. The city has been quarantined which international organisations and the government ruthlessly enforce. The Global Relief Effort (GRE) presents itself as a humanitarian organisation, but a more sinister side emerges when they send operative Kyle Crane into the city to find a file stolen from them by Kadir Suleiman. Arriving in the city, Kyle finds refuge at the Tower, a stronghold defended by "runners", survivors who have picked up parkour skills to avoid the infected. Despite himself, Kyle finds himself drawn into the lives of the runners and their perilous battle against a local warlord. 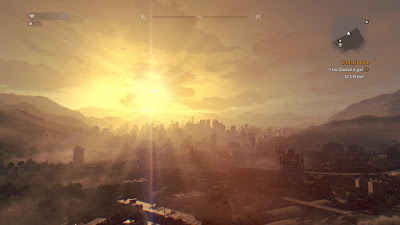 Dying Light is a survival horror open world zombie game, which sounds like a concept created by throwing darts randomly at genres and mashing together whatever they hit. Against the odds, it's a concept that works tremendously and surprisingly well. Although certainly not obscure, Dying Light didn't make a lot of noise on its original release in 2015, but over time has gained an impressive reputation for quality, most of it well-deserved.

The game is an open-world title, with the (very large) slums of the city of Harran open for exploration from the start. In the open world you can rescue survivors, hunt for supplies, kill zombies (who are vulnerable alone but dangerous in numbers) and upgrade your skills. The survival horror element comes from the fact that decent supplies and weapons are rare, so you have to craft your own out of the spare parts you find lying around, and from the day/night cycle. The zombies are more irritating than dangerous during the day, but at night their skills and agility increase and more dangerous zombie variants appear, including ones that can chase you up the sides of buildings. Going out at night is dangerous, but rewarding: any skill points you gain at night are doubled. Survive the night, and you get a healthy skill point bonus (if you die, they're lost). Two-thirds of the way into the game, you unlock a second region, the Old Town, which is even more fun to run around in. 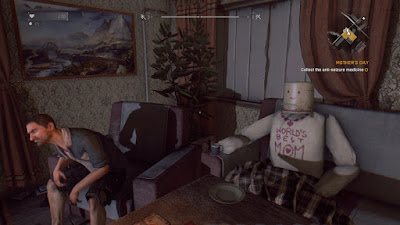 The game's main selling point is parkour, or free-running: Kyle is a nimble character and can jump large gaps between rooftops, haul himself through windows and made dangerous ascents of rickety towers. As his skills unlock, he gains the ability to grapple his way between buildings and fall greater distances without taking harm. Kyle is arguably the most nimble such character since Faith from Mirror's Edge, and it's as much fun to run and jump across the city as it is to defeat a zombie pack in combat.

The zombies are also interesting, being surprisingly quiet and challenging in battle with a number of variants who make things more interesting and lethal. Their biggest threat is their sheer numbers and their response to noise: a loud, long-running battle can draw hundreds of zombies into the area and the mid-game discovery and use of firearms and grenades turns out to be more of a liability than a useful development. However, the game also allows you to make strategic use of this fact: rival human factions can be overwhelmed by summoning a vast zombie horde and then setting them loose on the enemy rather than rushing in yourself. 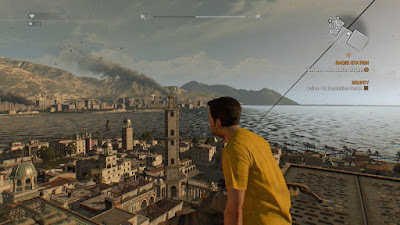 All of these elements interact really well with one another. Overlaid over the top of this is a strong narrative. There's a core storyline following Crane's attempts to find the enigmatic Suleiman but there's also a sizeable number of side-missions. Surprisingly, there's only a few fetch quests with instead most of these side-missions developing into labyrinth storylines of their own, often spawning their own related secondary missions and objectives. These missions usually expand on how the city fell into its current state and tell lots of short stories about people's lives, many of them falling into standard horror-tragedy tropes but are still generally well-told.

Graphically, the game is very solid (although rarely spectacular) and special mention must be made of the electronic, minimalist soundtrack, which is very accomplished. There's also some great sound effects (the shotgun is satisfyingly meaty in battle and the shuffling undead are accompanied by the gruesome schlopping sounds of bits of them falling off) and the fact that most of the game can be played co-op, which makes it even more fun. 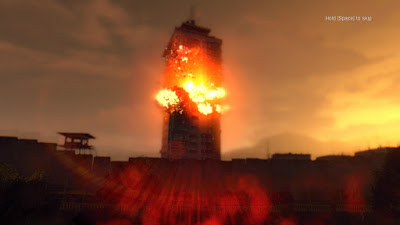 A couple of problems do emerge. The central, main storyline is pretty predictable. Even worse, it becomes progressively linear as it continues, with the end of the game seeing it transform into a standard corridor shooter where most of your parkour skills are unusable. There's also the feeling that the game hasn't really thought through some of the consequences of its abilities: the ending missions disable your grapple, for example, because it would make them far too easy, and a very lame "you are too tired to use the grapple" message pops up if you try. Eventually this narrowing of the game's focus reaches utterly farcical levels: the final battle of the storyline is, astonishingly, a Quick Time Event like it's 2006 or something.

A more omnipresent issue is that, in order to overcome the problem of memory-intensive saves and lengthy reloading screens, the game just respawns you if you "die", with all of your items and inventory intact (you just lose some of your accrued experience points). This means that there is no real price to be paid for dying and, weirdly, you can abuse this respawning system to brute force your way through problems. You may even get to the point where simply killing yourself to get to the nearest shelter is a viable alternative to running there (the game has no fast travel system), which kind of goes against the serious ethos of the game. 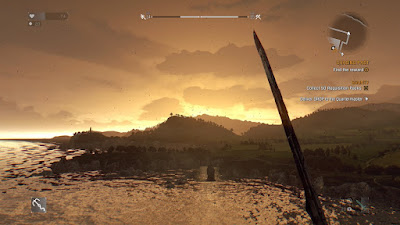 It'd be easy to let these problems drag the whole game down, but Dying Light does so much, so well it's hard to criticise it for things that make up a tiny amount of the 30+ hours if takes to complete the base game (not including the numerous DLCs and the expansion). At its best, Dying Light sells the fantasy of surviving against the odds in a post-apocalyptic city, with a rich atmosphere and satisfying combat. At its worst, it turns into a bog-standard linear borefest. But the game spends far more time at its best.