The producer of the new Buffy the Vampire Slayer series, which is in development at 20th Century Fox, has issued a statement confirming she is aware of fan concerns about a planned reboot or remake of the show with a new actress playing the role of Buffy. 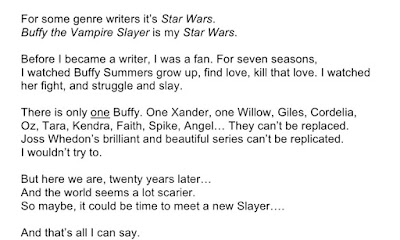 However, rather contrary to some media sites which are reaching some very strange conclusions about what the message says, the message fails to confirm that the new show will not be a remake of the original series.

To recap, news broke last week that Monica Owusu-Breen was developing a new version of Buffy with an African-American actress planned to take over the lead role made famous by first Kristy Swanson and then - much more prominently - Sarah Michelle Gellar in the 1990s. Joss Whedon was on board to produce and possibly co-write the first episode, but his commitment to a new HBO project (The Nevers) prevented him from taking on a more prominent role on the project.

The fan reaction was hostile, not to the idea of a black Slayer - no less than six black actresses played different Slayers on the original show - but over the idea of recasting Buffy (who, in both the original 1992 movie and the TV series was meant to be the archetypal California blonde Valley Girl) instead of developing a brand-new character that wasn't riding on the coat-tails of the original.

Owusu-Breen's statement is somewhat ambiguous, saying there can only be one Buffy Summers (ignoring the fact we've had two already), but then adding a "but" before pointing out that twenty years have passed and it's time to meet a new Slayer, which could be taken as either a new character (which seems unlikely as Fox will want to keep the Buffy the Vampire Slayer brand recognition) or a new reinterpretation of the Buffy character or even a Buffy: The Next Generation project which fans seem keen on, but seems unrealistic for practical reasons (notably, original cast availability).

This will likely be clarified in the coming months if Fox decide to move forwards with the project or not.
Posted by Adam Whitehead at 20:14