Wheel of Time showrunner Rafe Judkins has announced via Twitter that the second writer to work on the TV show will be Amanda Kate Shuman, who has already written the second episode, Shadow's Waiting (following on from Judkins' first episode, Leavetaking). 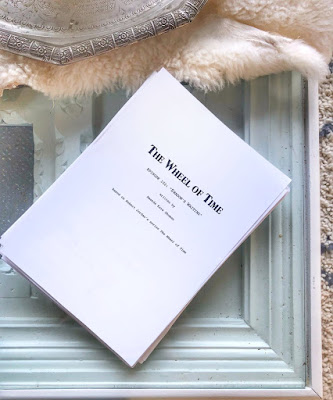 Shadow's Waiting is also named after a chapter in The Eye of the World, the first Wheel of Time novel. In this case, Shadow's Waiting is Chapter 19, together with the chapters immediately before and after, depicts our heroes' journey into the ruined city of Shadar Logoth.

Intriguingly, this news suggests that each episode will be adapting around 10-11 chapters of the novel, and theoretically the entire novel could be wrapped up inside six episodes. If, as expected, there is 12-13 episodes in the first season, it might well be that the first season is indeed adapting both The Eye of the World and The Great Hunt. This is both heartening news - trying to adapt one book per season when there are fourteen books in the series was always doomed to failure - but slightly concerning given the sheer mass of material they're trying to squeeze into each episode. Each episode of Game of Thrones' first two seasons, for example, very roughly adapted 80 pages of novel material. By contrast Wheel of Time is trying to fit between 140 and 150 pages into each episode.

The news that the second episode has already been written is also intriguing: officially, the show remains "in development" at Amazon and has not been formally greenlit. However, you would not normally solicit multiple episode scripts for a season before it is greenlit, only the first episode and then an outline for the remainder of the season. It is possible that Amazon are pursuing a course similar to what HBO did for Game of Thrones, by "amberlighting" further development, in essence agreeing privately to proceed with the project but not formally announcing it until later on for tactical or business reasons. In Amazon's case it might because there has also been big news this week about their Lord of the Rings TV project and they may be trying to open up some space before making another formal announcement about Wheel of Time.

The addition of Shuman to the writing roster also reflects what some fans had hoped for, that the TV show would use a mixture of male and female writers to help reflect the male/female duality of the novels, which is a key theme of the story.

Judkins is now promising to make further announcements on "Wheel of Time Wednesdays", so hopefully we may hear more information soon.
Posted by Adam Whitehead at 21:00

That is good news for the series! I was disappointed that it was an all-male team (so far) for LOTR. Some balance would benefit that project as well. Thanks for the update!

Perhaps the episodes for the WoT series aren't going to be standard-length 45 minutes but more an hour long, maybe even an hour-and-a-half, like Sherlock.

I'm actually getting excited now. As far as episode length goes, the longer the better IMO. Although I doubt we'll get anything longer than 1 hour.

Due to Jordan's infamous bloat, I can't see compressing pages being an issue in later books, but it could be an issue here.

Also I'm not sure I would list "The Following" on my resume if I were a screenwriter. That is some of the worst screenwriting of a primetime, major network show that I have ever seen.