Madmen, seers and witches proclaim the coming of the Whirlwind, a rebellion of unprecedented ferocity, a scourge that will wipe the subcontinent of Seven Cities clean of the pestilence of the Malazan Empire. The rulers of the Empire pay no heed, denuding the occupied territories of troops to reinforce the faltering campaign in Genabackis. From that continent comes an assassin, a thief and a former plaything of a shadowy god, who are the unwitting harbingers of the prophecy, and from the east comes a broken women and a shattered priest, who will defy it. As the Whirlwind is unleashed, the Malazan Seventh Army is given an impossible mission: to escort thirty thousand civilian refugees from Hissar to Aren, more than a thousand miles, facing constant attack all the way. This is a task that no ordinary human can handle, only a legend. 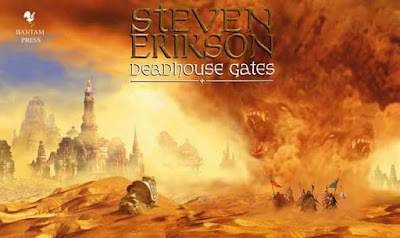 Deadhouse Gates is the second novel in the Malazan Book of the Fallen, succeeding (but not a direct sequel to) Gardens of the Moon. Deadhouse Gates relocates the action to the continent of Seven Cities with an almost entirely new cast of characters and a whole new storyline. Although having read Gardens of the Moon will be a help in reading this book, it is not necessary and it is indeed not unknown for readers to be directed to Deadhouse Gates as their first Malazan novel. This unusual recommendation has a solid rationale: Gardens of the Moon is a fine novel, but one that has to overcome a confused and somewhat incoherent opening before it starts to make sense. In contrast, Deadhouse Gates ranks comfortably as one of the single greatest works of epic fantasy ever written.

Indeed, the year 2000 may go down in history as one of the finest for fantasy fiction. That year also saw the publication of China Mieville's Perdido Street Station, Mary Gentle's Ash: A Secret History and George R.R. Martin's A Storm of Swords, three of the defining works of the modern fantasy genre. Deadhouse Gates sits very comfortably in such company.

Compared to the potentially confusing opening to Gardens of the Moon, Deadhouse Gates follows four storylines in a much more linear fashion. In one storyline, and the most epic, the Malazan Seventh Army must cross the entire subcontinent, escorting a refugee train to safety. With echoes of Xenophon's Anabasis (itself later fantasised as Paul Kearney's The Ten Thousand), or even Battlestar Galactica, this is a story of epic battles being fought as the innocent are defended in the face of a remorseless enemy and - sometimes - their own hubris. It's here that Erikson establishes some of his most memorable characters, such as the Imperial Historian Duiker, the indefatigable Bult, the warlocks Nil and Nether, and of course, Coltaine of the Crow Clan, High Fist of the Malazan Empire having formerly been a bitter foe of it. Their story - the Chain of Dogs - is a stunning and gripping narrative in its own right, every league of the journey bringing with it new formidable obstacles to be overcome, new enemies to be defeated and new tragedies to endure. The Chain of Dogs is Steven Erikson's Red Wedding, except drawn out to the length of a novel: an emotionally taut and increasingly shocking story of heroism and betrayal on a colossal scale.

Most novelists would have settled for that, but alongside that epic story we have Erikson's most emotionally intense and internalised struggle, that of Felisin Paran (sister of Ganoes Paran, a key protagonist from Gardens of the Moon). Felisin, a pampered and spoiled noble girl, is arrested and sentenced to exile on a distant island, to toil in criminal slavery. She endures horrors that afflict her soul and she becomes brittle, angry and bitter. Eventually the story takes her to a destiny that she was not expecting, and a responsibility she steps into for both vengeance and self-realisation. Felisin's story is hard to read but impressive in its emotional resonance. This is a realistic story, albeit also an incomplete one, with the other half of the story waiting to unfold in House of Chains (the fourth novel in the series; Book 3, Memories of Ice, returns instead to Genabackis and the story of the Bridgeburners). 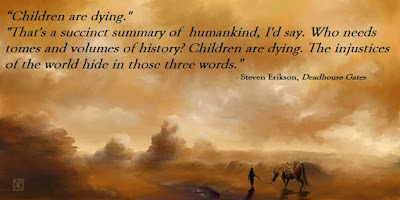 Next to that we also have two smaller quest narratives: the story of Icarium and Mappo, two wanderers out of the wastelands whom we gradually learn are cursed to live a life of friendship, trust and bitter deception; and the story of some familiar characters from Gardens of the Moon, namely Apsalar, Crokus, Kalam and Fiddler, who are on a journey back to Quon Tali and a confrontation with the treacherous Empress, but who are sucked up instead in the chaos of the Whirlwind.

These four storylines - which ultimately combine to a degree - give the novel a sense of unifying coherence missing from Gardens of the Moon. Instead of the start-stop opening to that book, Deadhouse Gates starts much more slowly and traditionally, the novel gathering a relentless and inexorable pace as it evolves. Erikson's prose is vastly superior to Gardens, the result of the nine year gap that fell between the two books and slightly awkward circumstances that led to its creation: originally Memories of Ice was the second novel, but Erikson lost the manuscript to a hard drive error when he was halfway through writing it; unable to face it, he instead switched to writing what was supposed to be the third book in the series instead, inadvertently giving us the continent-hopping structure of the saga that would become one of its hallmarks. The result is a novel that fairly seethes with intelligence, memorable prose and ambition.

Weaknesses? A first read will occasionally brush against confusion (particularly the introduction of a certain jade statue and the events that spiral out from it), but beyond that there are none. Deadhouse Gates takes all of the strengths of Erikson's writing and loses almost all of the weaknesses.

The Malazan Book of the Fallen is many things. It is a comedy and a drama, but it is also a tragedy - as the title implies - and it is a series about compassion and humanity. Arguably later books in the series suffer to a limited degree from Erikson's increasing introspection at the cost of plot and character, but no such weakness is present here, or in the book that follows it. Deadhouse Gates (*****) is a fantasy novel that does that rare thing and makes you think and feel. It is a good encapsulation of the entire series. It is available now in the UK and USA.
Posted by Adam Whitehead at 19:19

Strongest of the series and the only one I'd recommend

Adam, been lurking for a decade, never really commented. Have read many fantastic books based off your recommendations (Heroes Die being the best). =

You mentioned in your review that Memories of Ice would follow after Deadhouse Gates. It's been about 8 years since I read the books. Do you have a recommended reading order for them then since they aren't exactly linear? I know it's not like Discworld where it's more fluid but any suggestions when going through a reread would be appreciated. Thank you!

Personally I prefer Memories of Ice but this is easily the second best entry in the series. If MOI is a 10 then DHG is a 9.5

I do really like this one. Weirdly, even after two or three rereads, I think that Memories of Ice is much worse than either this or Gardens. Memories has its moments, for sure, but the writing felt much worse to me on a sentence-by-sentence level. This is despite my nominally-greater interest in the Memories characters than the Deadhouse characters.

I remember thinking after ADWD is out and I'm done reading it, I will fill the gap until TWOW reading Malazan series. Here I am, still didn't start even with Gardens of The Moon yet. And question is, if I start now, will TWOW arrive before I'm done with Malazan...

No. You are very safe. tWoW is never coming out.