Harry Potter and the Goblet of Fire

The Prisoner of Azkaban was a major hit movie for Warner Brothers and the Harry Potter franchise, rewarding their faith in choosing an unusual director for the project and focusing more on the bigger picture of the overall story of the series and worrying less about making each movie stand alone. However, for the fourth film in the franchise an even bigger challenge lay ahead: Harry Potter and the Goblet of Fire was an enormous novel, more than twice the length of The Prisoner of Azkaban and almost three times the length of the first book in the series. Fitting the book into one move proved challenging. 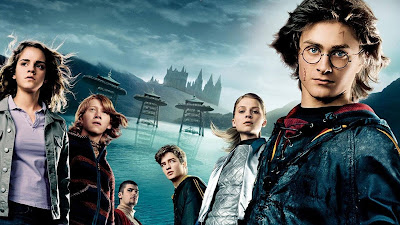 For this film and the remaining ones in the series, producer David Heyman and writer Steve Kloves realised it would now be necessary to strip each book back to its key storyline and major moments and use simplified plot beats and storytelling to get from one moment to the next. In the process, numerous subplots and minor characters would have to be cut. This was a difficult decision, but ultimately one that allowed them to tell the story in as effective a manner as possible, and ultimately the decision was supported by writer J.K. Rowling.

With Cuaron reluctant to repeat himself, veteran and versatile director Mike Newell was brought on board. Having made films as different as Four Weddings and a Funeral, Donnie Brasco and Mona Lisa Smile, Newell was adept at fitting his vision to the tone of the material and creating reliably effective cinema. It helps that The Goblet of Fire is one of the best books in the series, Rowling opening up her world to show more of the magical society beyond Hogwarts and introducing a whole host of new characters and factions. The wizarding tournament with its sequential challenges also allows for both very effective pacing and tension-building, resulting in periodic key set-pieces throughout the movie.

The biggest success of the movie is in furthering the characterisation of our heroes. They are now more confident and competent, although the teenage angst of growing up is also present (exemplified by Ron and Harry's falling-out and Hermione's confused romantic feelings). Like The Prisoner of Azkaban before it, The Goblet of Fire succeeds in making sure that, no matter what else from the books is dropped or condensed, the core characterisation of the three leads is made paramount. This expands in this movie to include a few other significant secondary characters, like Neville Longbottom.

New actors joining the franchise in this movie include the mighty Brendan Gleeson, whose deranged performance as Mad-Eye Moody makes you want to stand up and applaud, and Ralph Fiennes who debuts as the ultimate villain, Voldemort. As expected by now, the secondary cast give excellent performances.

The script is also impressive, jettisoning as it does all repetitive and not-immediately-relevant elements and characters and focusing on the core of Harry's journey. In this manner the film's pacing and structure manages to be significantly better than The Prisoner of Azkaban.

The movie does have some significant weaknesses, however. There simply isn't enough time to fully develop the secondary cast. Whilst Cedric (a pre-Twilight Robert Pattinson) gets a few key moments and scenes to flesh him out, Viktor and Fleur (the other two tournament competitors) barely get any development at all. It's also a bit weird to cast an actor of the stature of David Tennant (even pre-Doctor Who, he was still a well-known up-and-comer) and only have him in a couple of scenes before vanishing from the film (and the franchise).

Still, Harry Potter and the Goblet of Fire (****½) is the strongest movie in the series to date, with a strong cast and some clever writing that condenses the huge narrative down to a manageable, exciting screenplay. The movie is available now in the UK (DVD, Blu-Ray) and USA (DVD, Blu-Ray) as part of the Complete Harry Potter Movie Collection.
Posted by Adam Whitehead at 19:59

Interesting! You might be the only person on the face of the planet (that I've heard of, at least) that rates GOF higher than POA.

It seems like POA often wins "best movie in the series" polls, while a lot of people don't seem to like GOF as much for whatever reason.

I enjoy Goblet quite a bit (albeit not to the extent of Azkaban, but still). The film is paced better than most of the others in the series, the kids have grown up enough to put in really solid performances (Harry sobbing over Cedric gets me every time), and casting Ralph Fiennes as Voldemort was a brilliant move. His sequence in the movie is exactly the right kind of chilling.

But I feel like Mike Newell never really understood the character of Dumbledore. Michael Gambon is fantastic in the role every other time he's on screen, but in Goblet, he switches between vague, needlessly aggressive, and whimsical, and it rarely works. The scene where he shouts at Harry in a moment where Harry feels vulnerable and confused is one of the lowest moments of the franchise.