Filming concludes on GAME OF THRONES, for good

Filming on the eighth and final season of Game of Thrones concluded yesterday, according to fan site Watchers on the Wall. 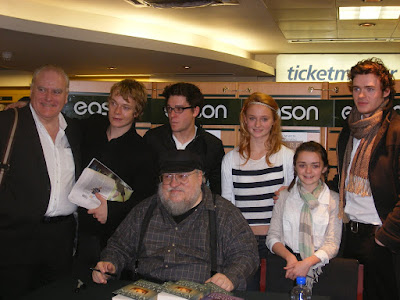 This news marks the end of a journey that began on 24 October 2009, when HBO began shooting the show's pilot episode in Scotland. A crowd of mostly-unknown young actors and a few seasoned hands like Sean Bean and Mark Addy arrived at Doune Castle to begin work on a speculative pilot based on a series of (relatively) obscure fantasy novels. The script was promising and, of course, HBO's involvement intrigued everyone, but it still felt like a shot in the dark.

Twenty-six days later, shooting on the pilot was complete, following additional location shooting in Morocco (for the Pentos scenes) and set filming in Belfast, Northern Ireland (which became the show's primary production base). HBO was sent the completed pilot a few months later and, well, they didn't like it. Mortified, producers David Benioff and Dan Weiss sat down with HBO to go through the problems. Impressed by Benioff and Weiss's willingness to admit their mistakes and find workable solutions, HBO greenlit the show itself, with production on the rest of Season 1 resuming on 23 July 2010. The series debuted on 17 April 2011 with a heavily recut and partially-reshot version of the pilot, which immediately garnered a positive critical reception.

Even so, no-one could foretell that Game of Thrones would become an international sensation, the biggest drama show in the world for most of its duration. Everyone from Snoop Dogg to Prince William is a fan and the show has generated online discussion on a scale that's truly remarkable. It's also made stars of young actors including Emilia Clarke, Kit Harington, Maisie Williams and Sophie Turner, propelling them into the Star Wars and X-Men universes, among others. The size and scale of the production has also peaked with this last season, with each episode officially costing over $16 million on paper (but in practice the budget appears to have no upper limit on it, as long as it's justifiable) and the shooting schedule running the longest of the entire series, from October 2017 to July 2018. Officially there are just six episodes in the final season, but it appears these episodes have no cap to their run time, so they may run significantly longer than the hour each episode has (mostly) clocked in at previously.

George R.R. Martin has also seen his personal fame explode as a result of the show's success, which has blasted sales of the Song of Ice and Fire novels from 12 million (in 2011) to almost 90 million today, making it possibly the biggest-selling epic fantasy series since Tolkien* (the series now has approximate sales parity with the Wheel of Time sequence, but far more actual readers) and dramatically increasing fan hunger and demand for the sixth book in the series, The Winds of Winter, to fevered levels.

It's been a hell of a ride since the start of filming (which I was privileged to experience a little of, as related here, here and here) and we'll see how it ends next year. Although the actors and extras can now relax (barring possibly some dialogue looping and of course promotional duties), the directors, producers and VFX crews are still working full-tilt on post-production, visual effects and scoring to bring the episodes to life. Game of Thrones' final season is currently due to air in Spring 2019. It will be followed, a year or two further down the line, by a possible spin-off series from a different creative team.


* Assuming you don't count Harry Potter as an epic fantasy, as some people do.
Posted by Adam Whitehead at 22:57

Looking forward to it. Sure, it bites that the show 'passed' the books....but the show has been so different from the books since about Season 4, does it really matter? I'm glad that production, filming, etc went so well for this project. Sure, a few re-casts here and there, but it's been pretty consistent.

Bring on anything Seven Kingdoms related!!!

There is dark side to all of this success, the show passed the books and that leaves a shadow at Martin's credibility as a writer and even to his legacy..