Duncan Jones has announced that he is directing a movie based on cult British comic Rogue Trooper. He made the announcement in a slightly oblique fashion via Twitter. 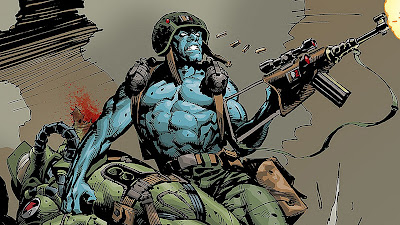 Rogue Trooper was created in 1981 by Gerry Finley-Day and Dave Gibbons, originally appearing in issues of 2000AD alongside characters like Judge Dredd. The series is set on the planet Nu-Earth, originally a paradise-like colony of Earth that was torn apart in a brutal, generations-lasting civil war between the Norts and Southers. This was has made the planet almost uninhabitable, with a toxic atmosphere forcing the people to live in domed shelters.

The original and most iconic storyline follows Rogue, the sole surviving of a bungled offensive. Rogue is a Genetic Infantryman (G.I.) who has been engineered to survive in the toxic environment, resulting in blue skin and an enhanced immune system. He is assisted by AI chips with notable personalities built into his helmet, gun and backpack. Rogue discovers his unit was sold out to the enemy by a "traitor general" and he sets out to expose and punish this individual in a storyline that lasted four years. Since the conclusion of that story, Rogue has appeared in numerous further adventures in both comics and video games.

British director Duncan Jones is the director of Moon (2009), Source Code (2011), WarCraft (2016) and Mute (2018), and is a director of some skill, although Mute was disappointing. It's unclear how far into development this project is, but we hope to hear more soon.
Posted by Adam Whitehead at 20:19

Bugger, was hoping for a Warcraft 2 movie, oh well..