Or rather re-announced with a new title and new cover art. In an (I believe) exclusive scoop, I can reveal that the sequel to the excellent The Wolf in the Attic (2016), formerly known as The Other Side of Things, is now called The Burning Horse. It will be released in autumn 2019 from Solaris Books. 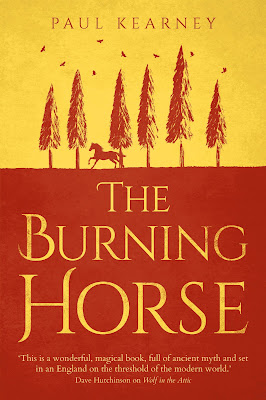 Excellent news for fans of Paul's work.
Posted by Adam Whitehead at 20:41

Can't wait. I loved Wolf in the Attic. Thanks for the scoop.

Thanks for the update! Since you know more about the publishing world than I do may I ask if you remain hopeful for the conclusion to the Sea Beggars series? I know you have mentioned the problems it is facing, but are the odds good that it will eventually be published someday?