1972. Ron Stallworth is hired as the first black police officer in the Colorado Springs Police Department. Facing discrimination from his coworkers and becoming disillusioned, Stallworth finds his faith restored when he meets local activists and realises he can do good work from inside the police department. He promptly sets about infiltrating a local chapter of the Klu Klux Klan by telephone, which succeeds a bit too well and he is invited to a face-to-face meeting. He recruits fellow officer Flip Zimmerman (a white, Jewish man) to be his "face" and, together, they set about exposing the local chapter for what it is. 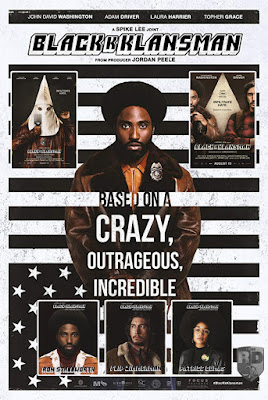 There many histories of the United States of America, but by far the most painful and difficult one is that of race relations. The US was a slave-owning nation at its birth, only gave up slavery through a bloody civil war and more than half a million deaths, but never escaped its shadow. Oppressive laws and a hostile environment for ethnic minorities plagued parts of the country for another century until the civil rights movement of the 1960s ostensibly equalised laws, but systemic racism and bigotry remains ingrained in parts of the nation to this day.

Spike Lee is one of the best explorers of this dichotomy at the heart of the United States, a country where simultaneously anyone can aspire to be anything, but a huge part of the population is still judged by the colour of its skin over the content of their character. Since the mid-1980s he's been finding stories to tell of an America that many people don't see, or actively ignore, and finding ways of doing that through humour, shocking drama and canny characterisation.

Black KkKlansman is the most successful of his films for many years. It is, bemusingly, a true story. A black police officer infiltrated a chapter of the country's most infamous racist organisation and set about blow it open from the inside, helped by a fellow white officer to act as his public face. The operation was extremely dangerous for all involved, and was also very complex, since the two officers had to know everything about one another, so they couldn't be caught out if cross-questioned.

Lee gives the story a little embellishment - the real Ron Stallworth refused to identify his white collaborator in fear of endangering his life, so Flip Zimmerman is a total fabrication, as is his love interest - and sometimes veers away from the investigation to provide more historical context to the time period, but mostly the story sticks to the facts, which are bananas.

As a film, it is hugely accomplished and ranks among Lee's strongest work. Lee's latter career has been patchy, most notably his ill-advised remake of Oldboy, but Black KkKlansman is excellent. It has a superb central cast, with John David Washington blowing the roof off in his measured performance as Stallworth and Adam Driver (currently enjoying the "literally showing up in everything you watch" phase of his career) doing some of his career-best work as Zimmerman. Laura Harrier (Spider-Man: Homecoming) also does great work as the activist/love interest. Topher Grace has the hardest and arguably most thankless job in playing Klan leader David Duke, but pulls it off with sometimes hard-to-watch aplomb.

The movie works because it balances, on a knife edge, a study of race relations with comedy. The situation that Stallworth and Zimmerman are in is inherently ridiculous and that comes through in the plot, but it's also extremely dangerous. Sometimes the movie spins from a genuinely funny gag to a moment of genuine fear on a dime and then back again. There's more than a few hold-your-breath moments of tension in the film, which serves as a timely reminder what a master craftsman of cinema Spike Lee can be when he really goes for it.

The film has some issues. The problem of systemic racism within the police force is raised at the start of the film, and again when Stallworth has to undergo a "random" stop-and-search whilst undercover with a group of activists, but it pivots pretty quickly and pretty hard to the Klan storyline. Saying "the Klan are racists and a problem" is a very easy thing, whilst the issue of how to address police racism is much more complicated and difficult to deal with. Fair enough that that's not the story Lee wanted to tell, but it does arguably leave a more nuanced and difficult (and timely) story on the table. At two and a quarter hours with a somewhat slight (if powerful) story, the film also does start to threaten to outstay its welcome, but Lee always finds a good character scene or moment of humour (or horror) to bring the story back on track.

Black KkKlansman (****½) sees Spike Lee back on form and doing what he does best, using real events to craft a compelling film that works as both pure entertainment and also a social commentary. It is available now in the UK and USA.
Posted by Adam Whitehead at 21:09