The liberation of the Sabbat Worlds is in full swing. The overextended Crusade invasion front is now under flank attacks, with the world of Enothis proving a pivotal flashpoint. With the war raging over a vast continent, the battles hinge on the forces of the Aeronautica Imperialis, the atmospheric fighter and bomber wings flown by the Imperial Navy and the Imperial Guard. The Phantine XX, fresh from their victory on their homeworld, are deployed to Enothis to help mount a last stand against the Archenemy. 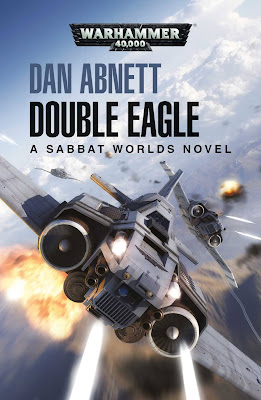 Double Eagle is a spinoff from Dan Abnett's signature Gaunt's Ghosts series of science fantasy military adventures, in particular the fifth novel in the series, The Guns of Tanith. Fortunately, references to the events of that novel are slight and familiarity with that book, the Gaunt's Ghosts series in general or even the wider Warhammer 40,000 universe is not required to enjoy this novel.

Double Eagle is, basically, the Battle of Britain But With Lasers. Previous Warhammer 40,000 books largely focused on the ground war involving the human Imperial Guard and the genetically-engineered, superhuman Space Marines, with occasional nods to the armoured divisions and the space fleets, but this is the first book to really delve deep into the air force. Influences from World War II movies and books about the air war over Europe and the Pacific are clear, although (as is often the case with WH40K) there are sacrifices to realism in pursuit of the rule of cool. Despite being set an unfathomable 39,000 years in the future, the aircraft in use by both sides are far slower than, say an F-15 Strike Eagle and they seem to have less fuel than a Hurricane (given how curtailed dogfights are before someone has to bug out).

Once you accept that - and you have to if you want any hope of enjoying the many excellent stories in this setting - then you can kick back and enjoy the book. This is Dan Abnett doing what he does best: assembling a collection of flawed, relatable characters, putting them through the grinder of war and telling a great-action-packed page-turner in the process. Double Eagle starts a bit slower than many of his books - the result of a need to introduce a dozen or so major new characters (and reintroduce a couple of characters from The Guns of Tanith, which most readers may have forgotten about) rather than being able to pick up with a well-established cast from an ongoing series - but soon kicks into gear as we witness the air war for Enothis unfolding in its full glory.

In fact, I wondered if Abnett had made a bit of a mistake by having such a large cast and the need for each main character to have their own story arc, given the need to also depict the war in its full scope and explain the intricacies of air combat, all in a very tight page count. However, Abnett, as usual, delivers with aplomb. The widely-scattered characters and storylines converge satisfyingly at the end of the book for a major battle and most of the storylines are wrapped up quite satisfyingly

Double Eagle (****) won't be winning awards for originality, but it is Abnett delivering another perfectly-executed barrel roll of action, strong characters and addictive writing. In fact, Double Eagle scores more highly than much of his work because, being so independent of other series, it works very well as a stand-alone novel that can be used to sample his writing style and skill. The novel is available now in the UK and USA.

A sequel, Interceptor City, has been promised for fifteen years but is still a fair bit down on Abnett's schedule (as he is currently working on the Horus Heresy's concluding arc and on his third Inquisitor trilogy). However, Double Eagle does not end on a cliffhanger and can be enjoyed on its own merits.
Posted by Adam Whitehead at 12:59