Marvel and Games Workshop announced last year that they were joining forces to release a line of Warhammer comics and now they've confirmed the first title. 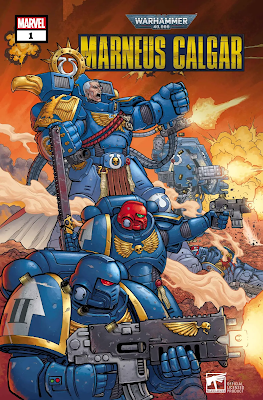 Warhammer 40,000: Marneus Calgar will tell the origin story of Marneus Calgar, Chapter Master of the Ultramarines and one of the most storied characters in the Warhammer 40,000 lore. Some of Calgar's most famous battles have been related before in two novels by Paul Kearney, Calgar's Siege and Calgar's Fury (a third book, Calgar's Reckoning, is on its way), but this new comic series will reveal more about Calgar's early days as a Space Marine. Kieron Gillen, feted for his recent Star Wars work about Darth Vader, will be writing the new comic series.

More series are in the planning stages, including more Warhammer 40,000 fiction and very likely a line based on the Age of Sigmar fantasy setting.
Posted by Adam Whitehead at 16:30