Michael Moorcock rules out an ELRIC TV show or movie in the near future, citing similarities to THE WITCHER

Michael Moorcock, creator of the infamous sword-wielding albino Elric of Melnibone, has reported (via Ansible) that TV and film interest in his creation has dried up due to the success of Netflix's The Witcher and HBO's Game of Thrones. 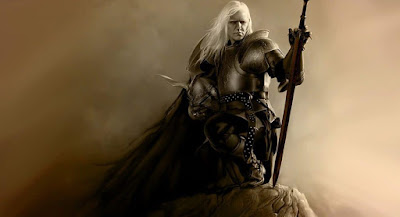 "Heard today that some companies are turning down Elric project because it reminds them too much of GOT and The Witcher. A pretty irony. So much for “homages”...."


Elric's creation first appeared in the 1961 novella The Dreaming City, as a nobleman of a doomed empire cursed to wield the soul-feasting, intelligent sword Stormbringer. Elric went on to appear in numerous short stories, novellas and novels (most notably Stormbringer, published in 1965), the most recent of which was published in 2010.

Elric may be counted as one of fantasy's single most influential and important characters, inspiring a character of the same name in the television series Babylon 5, the rather blatant homage character of Anomander Rake in Steven Erikson's Malazan Book of the Fallen and, indeed, Geralt of Rivia. However, Geralt is similar to Elric only superficially: both are white-haired and have the nickname "the White Wolf," but Geralt is not a sickly albino and his day job, killing monsters for coin, is much lower-profile than Elric's stories which normally see his homeland, the entire world or, on occasion, the entire universe in peril.

Although Geralt and Elric are very different characters, that superficial similarity seems to shut Hollywood's interest in the character, although I suspect such interest was relatively low to begin with: the Elric stories are hugely important in the history of SFF, but are much less well-known these days than either Sapkowski or Martin's work. An Elric movie has been mooted since the 1970s and never taken off, long before The Witcher or GoT came on the scene. The Elric stories are pretty grim and almost nihilistic in a way that even GoT at its grimmest is not, and they also lack a well-developed, large supporting cast that a TV show or even a movie would really need to work. The production budget would also need to be enormous.

We may yet see some of Moorcock's other work on the screen, though. The BBC are still developing a TV series based on Moorcock's four-volume History of the Runestaff fantasy series.

There are no female characters worth speaking of and I can't imagine the industry jumping on this amidst other better content, though stuff that is less important to the development of SFF. I can't imagine Sapkowski being better or more well known than Moorcock, but I guess a series can take you far. And Moorcock is always his own worst enemy, ranting against Tolkien and other authors. Not who you want to work with to turn decades old content into something that speaks to current concerns

Sorry, I meant Sapkowski's books vs Moorcock's. It's an obvious no contest if you include other media. And I'm really interested in the percentage of Sapkowski's work that is read cover to cover as opposed to purchased as a tie in, vice the same percentage for Moorcock. I thought your reviews were quite fair but for me Sapkowski is an odd duck. Never thought a video game could be a better exploration of a character than the original book, but in this case I think it is.

Wow....come on, ye nerds, I read Stormbringer when it came out in the 60s, and that story still resonates....its literature...a d the root source of so many tropes. It is, in my opinion, tits on a Ritz! Read it a d I think you will agree.

Sad. Yet another let down. Elric fans continue to be disappointed with the lack of a screen adaptation.

So many great characters from classic fantasy we'll probably never see on the screen... Elric... Corwin of Amber... Nifft the Lean... Fafhrd and the Grey Mouser... Cugel the Clever...

It is shame about Elric. I think it I would like to see the Dancers at the End of Time trilogy be made into a mini-series.

I prefer the books anyway. It’s closer to how I imagine it.

Why not animation then?

It would be a great thing to see it produced.

And if not Elric, Hawkmoon or Erekosë deserve an adaptation as well.

And don't forget Corum. I must say I am stunned to learn that a giant like Moorcock is having such difficulty getting his groundbreaking work onto the screen. He is one of the architects of the fantasy genre. As a teenager, Elric of Melnibone was like no other book I had read. It combined the scholarship of literature with the excitement of comic books. It was like seeing Star Wars for the first time, experiencing literature in a new way. Years ago I actually sent Michael Moorcock a first draft of my fantasy novel, The Sylvan Horn, and he was kind enough to say it showed considerable promise. He also added that he broke his rule against reading unsolicited manuscripts to look at it. More years later my book won a Gold medal in the Readers' Favorite Book Award Contest and was also nominated for a Montaigne Medal for Most Thought Provoking Book. The story is not as dark as Elric, but I have often thought that my character Efkin could be seen as a lighter side of the albino, a more positive version with a happy childhood. But getting back to Elric, I can't believe everybody in Hollywood is sitting on this. Anyone who has the rights to produce an Elric film and doesn't produce one should be examined by a team of medical experts. I wish I had those rights. I majored in theater and film and won the Bill Sherwood Award for Most Promising Filmmaker at the Hunter College Film Festival. I like to dream that if somebody gave me the rights to Elric I would manage to put together a crew and shoot the film. I have even dared to imagine myself in the lead role. I'm tall and skinny and have been told that I look like Elric. All I need is a long white wig on my head.

Yes elric and fates doomed heroes
Deserve the right and proper screen treatment, hes a legend as are all the champions eternal.
Hollywood would only balls it up,better stay on the page eh .

I’ve wondered why someone doesn’t make a video game based on Elric. If someone could get Rockstar interested, they could make one hell of a game based on the property.

And McDonald's has sold billions and billions of burgers...

Robert, you are a cool dude. You inspire me. I used to make homemade movies with my super8 can and plenty of other gear. I just turned 50 today and reading your comment has been the highlight of it . I'm going to seek a copy of your book. Keep up the good work.