The Old West, 1870. Bounty hunter John Cooper is hunting down Frank, a notorious outlaw who killed his father. Frank is in bed with the DeVitt Railroad Corporation, and thus is protected by wealth and power. Cooper joins forces with a group of disparate allies who each have their own reasons for taking on these formidable enemies. They have to work together and make the most use of their skills to win the day. 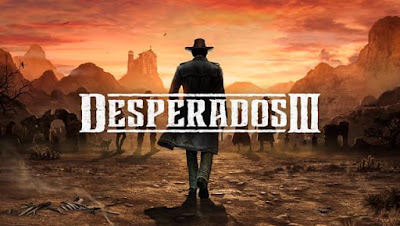 Back in 2016, Mimimi Games came out nowhere to deliver Shadow Tactics: Blades of the Shogun. A stealth tactics game built around achieving at times impossible-seeming objectives with a limited team of characters. It was unexpectedly genius and emerged as my favourite game of the year. It was a game that wore its influences pretty openly: the Commandos series from the late 1990s but, possibly even more overtly, the Desperados series from the early 2000s. Focus Interactive, who had the Desperados IP, hit on the idea of hiring Mimimi to make a prequel to those games (to not put off newcomers to the series) using the Shogun engine. It was a match made in heaven.

Fortunately, this partnership delivers in spades. Desperados III wears two hats, as an actual continuation of the Desperados series and also as a semi-sequel to Blades of the Shogun. It fulfils both objectives admirably.

The game consists of sixteen missions, each taking place on a massive (and I do mean massive) map filled with enemies. You have between 1 and 5 characters, each with their own distinctive personality and set of skills, equipment and objectives. The aim of the game is stealth: you have to reach an objective by avoiding guards. You can try to sneak past them or pick them off one-by-one. Whilst your characters are capable fighters, they are very easily overwhelmed, so the aim of the game is to keep as low a profile as possible. You can also knock guards (or well-meaning civilians who'll raise the alarm if they spot you somewhere you shouldn't be) out if the idea of mass slaughter is unpalatable, but doing so is time-consuming and you risk detection. 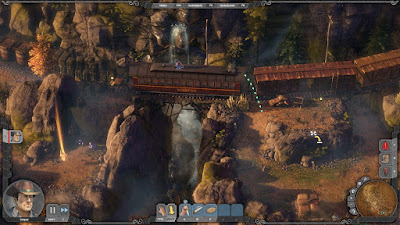 There is some cleverness to the game. One of your characters can whistle to lure unsuspecting guards into ambushes, or one of your female gunfighters can put on a disguise and lure enemies to their doom, but more disciplined enemies will ignore such distractions, forcing you to be more creative in how you handle the situation. An optional mode allows you to pause the game to set up actions for your characters to execute simultaneously, a good way of taking out two guards who are permanently in each other's field of view.

Desperados III adds guns to the Blades of the Shogun mix and encourages a somewhat more aggressive style of play throughout. Each gun as a noise area which will alert guards in that zone, so you can be surprisingly aggressive in taking on enemies as long as you are also careful of what the consequences might be. Your sniper character - Dr. McCoy - is decidedly powerful in taking out enemies on watchtowers (whose disappearances tend to be easily missed by their comrades), but he is limited by ammo.

The decidedly semi-realistic tone of the game takes a turn for the weird just before the halfway mark when you recruit a character who can use actual voodoo magic, including seizing control of an enemy's mind or "linking" two characters together so whatever happens to one, happens to both. This feels a bit weird (and even overpowered) when it first appears, but it later gives rise to some of the game's most inventive puzzles and challenges, so it's fair enough. Some of the moves you can pull off with Isabella (and her pet cat) will have the player giggling like a buffoon. 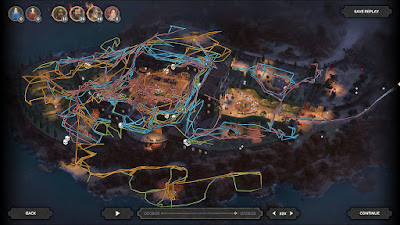 Desperados III succeeds through its magnificent level design, which is often jaw-dropping. It's not uncommon, especially in the back half of the game, to be confronted by a mission that appears flat-out impossible, until you find that one guard who goes out of everyone else's eyeline for a few seconds, which then causes the map to start unravelling lot a knot. Each mission is systemic rather than prescriptive, though; it's completely up to you which tactics and abilities you use to achieve each objective. There's some excellent videos of the game developers being taken by surprise by some of the solutions that players have come up with to puzzles. There's also a splendid mission post-mortem screen which takes you (fairly quickly) step-by-step through the mission you just completed, showing how it unfolded without the several dozen quicksaves and quickloads you likely went through in the process.

The story is a fairly serviceable revenge narrative, but there's some nice character beats dropped on top of that (such as grumpy McCoy's gradual, reluctant acceptance into the team). At sixteen missions taking about 35 hours to complete, the game also hits a sweet spot of not being too long whilst not outstaying its welcome. In a welcome move, the game adds a bunch of optional missions at the end of the game which take place on the existing maps, but adds new enemies and puzzles, or allows you to use characters who weren't available earlier on in the game. More of these missions will be dynamically added in free updates over the coming months.

I'm not sure if there's any flaws of note in the game. It does share Shogun's occasional confusion on what you're trying to get a character to do, such as thinking you're trying to get a character to climb a wall rather than hide in the shadows next to it, but these occasions were much reduced from the first games. Hardcore Desperados fans may also grumble about the lack of utility for horses. In the original games you can ride horses (sometimes using them to reach inaccessible ledges), release them from the stables to cause a distraction or come up with other creative ideas; in this came the only thing you can do with them is spook them to kicking someone standing next to them.

Overall, Desperados III (*****) is compelling, incredibly smart, fiendishly clever and ridiculously addictive as it forces you to overcome its challenges on each mission. It is available now on PC, PlayStation 4 and X-Box One.
Posted by Adam Whitehead at 13:23