Steven Erikson has resumed work on Walk in Shadow, the much-delayed concluding novel in the Kharkanas Trilogy, a prequel to his popular Malazan Book of the Fallen series. 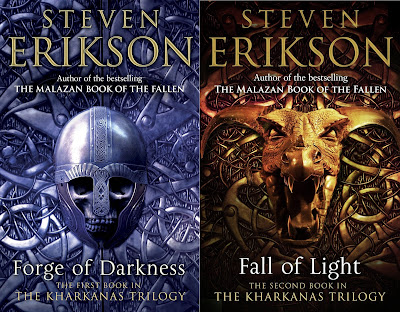 Erikson published the first two books in the series - Forge of Darkness and Fall of Light - in 2012 and 2016. In October 2017 he announced an indefinite delay to Walk in Shadow after being advised that sales for the first two books in the series were disappointing. Instead, he began work on The God is Not Willing, the first novel in the Witness Trilogy, a direct sequel to the Malazan Book of the Fallen, picking up five years later and catching up on popular characters (most notably Karsa Orlong, although he won't actually appear in the first book).

He concluded work on The God is Not Willing several months ago but due to delays at the publisher, learned that the book will not be published until late 2021 or early 2022. After debating the issue, Erikson has now committed to finishing Walk in Shadow as soon as possible, for likely publication in 2022 or 2023, before resuming work on the second Witness book.

In his lengthy Facebook post, Erikson debates why the Kharkanas Trilogy has done more poorly than the main Malazan sequence, pondering his choice of prose style (which is even more ornate in Kharkanas and somewhat different to the main series), subject matter (a long-unfolding, gruelling tragedy) and the issue of "Malazan fatigue," noting that he perhaps should have delayed Forge of Darkness by a year or two.

From my position, I suspect Erikson mainly suffered from the four-year gap between the two books. That's really unremarkable by some standards, of course, but considering his previous pace of publishing (although not writing) ten huge novels in eleven years, it was relatively a huge gap in publication. There's also the issue of "completion syndrome," with some readers waiting for a whole series to be finished before starting it. There's also the issue that Fall of Light was published with relatively little fanfare and marketing, and fan reaction to the two books has been mixed.

Still, completing the trilogy will be a major achievement and hopefully Erikson can conclude the story in a way that satisfies his goals and his fans.

Malazan fans won't have to wait quite so long for their next fix, though. Ian Cameron Esslemont's next novel in the same world, The Jhistal, will be published on 17 November this year.
Posted by Adam Whitehead at 23:08

Loved Malazan book of fallen, but i thought the pacing in the Kharkanas books were horrible. Probably one of the most boring reading experiences i have ever had.

Personally I found the 1st book hard work to read.

Possibly more so than Gardens of the Moon, which I found just threw the reader into the deep end, but had more of a reward.

The Witness trilogy will be interesting.

I have found the Path to Ascendancy series enjoyable as well.

I think the decision to reflect a stagnant society by using moribund prose at a turgid pace has backfired somewhat!