The latest Star Trek series has gotten an airdate. Star Trek: Lower Decks launches on CBS All Access on 6 August 2020. 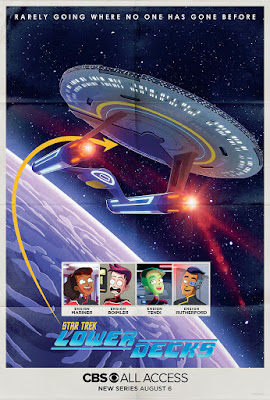 Lower Decks, which takes its name and premise from the Season 7 episode of Star Trek: The Next Generation of the same name, is the second animated series in the Star Trek franchise, following on from Star Trek: The Animated Series, which aired for two seasons in 1973-74. The series follows the crew of the California-class USS Cerritos in the year 2380, just after the events of the film Star Trek: Nemesis. The series will focus more on the junior crew of the starship, the crewmen in at the deep end in dealing with crises whilst the bridge crew make the important decisions.

The show is expected to have a lighter and more humorous tone than the other Star Trek series. It will air on CBS All Access in the United States and CTV Sci-Fi Channel in Canada, but no European broadcaster has yet been announced.

Season 3 of Star Trek: Discovery is expected to arrive in the autumn. Production of the next batch of Star Trek shows - Season 2 of Star Trek: Picard, Season 1 of Section 13 and Season 1 of Strange New Worlds - are currently on hold due to the coronavirus pandemic. A further animated show aimed at a younger audience is also in co-development at Nickelodeon; it is unclear what stage of development this show is at.
Posted by Adam Whitehead at 17:44

Looks very much like Final Space in terms of the style of the characters. It'll be a push to be as good as Final Space though