Revisiting the Wasteland: FALLOUT 3 and the Art of War Never Changing

You never forget your first time in the Wasteland, and for many millions of people that first time was in the video game Fallout 3. After an odd half-hour in which your character is born in an underground vault, has a rubbish birthday party and then a frantic escape from said vault (possibly killing your best friend's dad along the way), you emerge, blinking and startled, to behold a vast, desolate wilderness. Sitting on the distant horizon are a cluster of buildings, clearly recognisable among which is the needle of the Washington Monument and the partially-collapsed dome of the Capitol Building. The scale of the landscape takes your breath away and must rank among the most iconic moments in all of gaming. 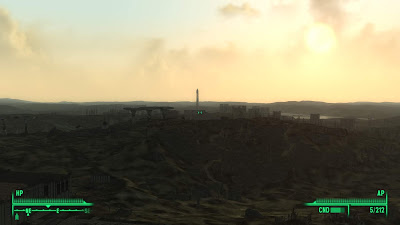 The Capital Wasteland in all its blasted glory.

Fallout 3 was released on 28 October 2008 and marks an important moment in the history of gaming, for both Bethesda Softworks and the wider Fallout franchise. The first game in the series - Fallout (1997) - had been developed and released by Interplay's internal RPG development over a full decade earlier. It was a top-down, isometric RPG with a strong focus on character development and turn-based combat. The retrofuturistic, post-apocalyptic setting and iconic factions such as the Brotherhood of Steel and Super Mutants caught the attention of tens of thousands of fans, and resulted in a true cult classic.

The game's creator, Tim Cain, went off to other projects so a newcomer named Chris Avellone was drafted in to create the sequel: Fallout 2 (1998). Fallout 2 had a lot more humour and a darker, more adult tone than the first game whilst introducing new factions like the Enclave. It was also well-reviewed and sold reasonably well, but it was massively overshadowed by the release a few weeks later of Baldur's Gate by BioWare (and published by Interplay). Black Isle were drafted into making Dungeons and Dragons games using BioWare's Infinity Engine, and the Fallout franchise fell by the wayside. Another studio developed a so-so tactical combat spin-off game, Fallout Tactics (2001) before Black Isle finally put Fallout 3 into development, giving it the code-name "Van Buren". Development was well underway when Interplay finally collapsed altogether in 2003, halting work on all games in progress. 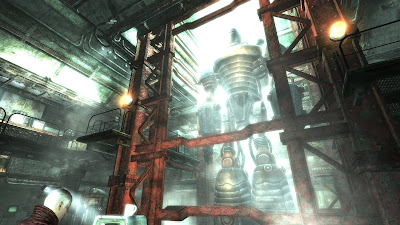 Meanwhile, the game studio Bethesda Softworks had been establishing a name for itself in the 1990s with sports games and porting games for other studios from one format to another. Getting bored of that, they unexpectedly switched to making epic fantasy RPGs with the well-received Arena (1994) and Daggerfall (1996), the first two games in their Elder Scrolls series. They attempted to expand the universe with two spin-off games, Battlespire (1997) and Redguard (1998) which were both critical failures and left the studio teetering on the brink. Some much-needed recapitalisation later, they decided to go all-in on one game which would be their make-or-break moment. That game was Morrowind (2002), the third RPG in the Elder Scrolls series. Morrowind was a huge hit, especially on console (it was Bethesda's first console game, getting a port from the PC to the original X-Box), and Microsoft asked for a cutting-edge sequel to help sell their X-Box 360 follow-up console. This resulted in Oblivion (2006), which was a monster smash hit and transformed Bethesda's fortunes altogether.

However, in 2004 Oblivion was still in development and Bethesda were faced with the prospect of laying off some of the pre-production and design staff who were no longer required with the game in full development. Feeling this was a waste of talent and resources, Bethesda decided to start development on a second game, which would allow the main team to transfer over as soon as work on Oblivion was completed. It was also decided that this should be a different franchise to Elder Scrolls, so the designers would not get bored of working constantly on the same series. Bethesda's creative game director Todd Howard was asked what type of game he'd like to make and he suggested a post-apocalyptic setting, "like Fallout". Initially the game was going to be a "spiritual successor" to Fallout, but Bethesda's management decided to investigate the rights and situation and discovered that Interplay were on the brink of bankruptcy. To help save them, Bethesda offered to buy the rights to the entire Fallout franchise from them. Interplay agreed, allowing Bethesda to make a brand-new Fallout game. 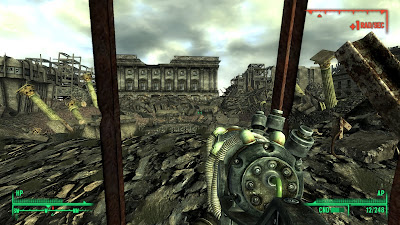 The White House's Christmas 2277 decorations left something to be desired.

Work on Fallout 3 began whilst work on Oblivion was still ongoing, and used the same GameBryo Engine. Early on the developers ran into some technical issues. Oblivion, famously, looked amazing on release in 2006 but the developers had carefully used mountains, hills and trees to prevent players from seeing too much of the environment in any one go, saving video memory. The game could also be on any scale it liked, as players lacked a real-world equivalent to compare things to, complete with small medieval towns and constrained cities. Fallout 3 on the other hand was based on a real location, the distinctly un-mountainous and rather large DC metropolitan area. This pushed the developers to the limit of their technical ability as they attempted to make the game look vast, epic and convincing whilst also not crashing every five minutes. A few compromises later - including the green tint to everything to reduce the number of colours on screen and the dividing up of DC proper into distinct, small zones connected by metro tunnels - they had the makings of a memorable game.

Fallout 3 was released to widespread critical acclaim and commercial success in 2008, although fans of the first two Fallout games were largely unimpressed, complaining of a "dumbing down" of story, world and character in the pursuit of money. Their complaints are not entirely invalid, and Fallout 3 has some significant problems with worldbuilding, dialogue, general writing and quest design, and these should not be dismissed. 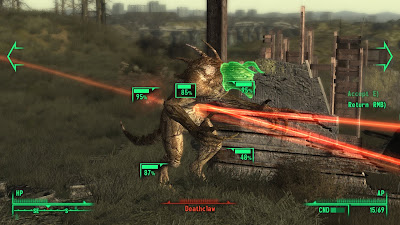 But what Fallout 3 did better than the first two games in the series - and arguably the three that have followed - is atmosphere. There's a sparseness to Fallout 3 which remains uncanny and strange. Fallout: New Vegas has a map which is more linear, directing players along somewhat (but not totally) similar roads. Fallout 4 is a much more densely-clustered map where you can barely walk six feet without tripping over three quests, a settlement (which needs your help) or a fight between opposing factions. Fallout 76 is a heavily-bugged multiplayer fiasco which we needn't go into here.

But Fallout 3 is a weirdly lonely game. There's plenty of points of interest on the map and random mutated monsters and raiders wandering around, but there's also quite a lot of quiet trudging across the landscape between distantly-glimpsed structures. Something Bethesda had teased in Oblivion, but really delivered in Fallout 3, was the idea of seeing something intriguing in the distance and being able to walk over to it and investigate further. Fallout 3 does this by placing the Capitol and the Washington Monument on the horizon the second you leave Vault 101 early in the game, and your path will eventually lead to those structures (shades of Half-Life 2, where you see the huge Citadel in the opening moments of the game and your entire journey will eventually loop round and lead you back there). The game did allow you to play with a companion character, but given their extreme fragility (at least until you meet the extremely tough Fawkes), it was often less hassle to travel by yourself. 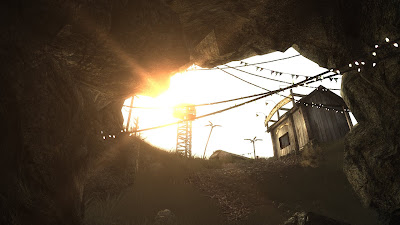 Mods have dramatically improved Fallout 3's appearance by replacing the game's original muddy textures with 4K versions, revamping the lighting engine and improving everything from draw distance to the models for bottles. They also increase the amount of video memory that can be used, hugely improving performance.

This sparseness is down to a surprising paucity of quests: Fallout 3 has only 59 quests, approximately half the number of New Vegas and one-third that of Fallout 4. That's actually not a major criticism, as in Fallout 3 you're spending less time checking off boxes and more time exploring for your own enjoyment, ransacking buildings for supplies and roaming off the beaten path to check out what appears to be an abandoned power station or hospital. Arguably not since STALKER: Shadows of Chernobyl had been released almost two years earlier had a game put you in such a desolate, haunted landscape and allowed you to explore it as you will (and STALKER, despite being a far more hardcore and tougher game, was considerably smaller in scope).

The game also enjoyed a terrific musical score by Inon Zur, which took in everything from an epic, stirring orchestral motif to bleaker, more haunting moments mixed in with hits from the 1930s and 1940s. 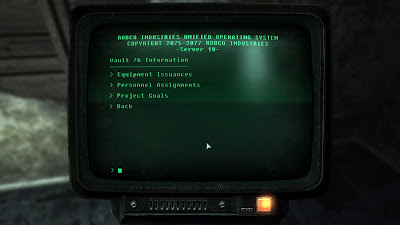 Fallout 3's writing was not great, but it's easy to forget that it did have some splendidly inventive quests, some of them liberally borrowed from pop culture. The slaves with exploding neck collars are taken from the movie Battle Royale (2000), the quest with the giant fire ants is based on classic pulp SF movie Them! (1954) and a VR-gone-badly-wrong black-and-white sequence is inspired by the movie Pleasantville (1998). Liberty Prime, a gigantic "anti-communism" battle droid, is a clear nod at Transformers with a design homaging The Day the Earth Stood Still (1951). The society made up completely of kids at Little Lamplight seems to be an inverse version of The Lord of the Flies (as it appears to be the most stable town in the game, even though it's best not to ask where the fresh kids come from).

Other elements of the game have aged better than expected - the VATS-driven combat, which emulates the turn-based approach of the first two games, remains splendidly punchy and gory, although trying to play Fallout 3 like a first person shooter rapidly turns into an exercise in frustration - but others have not, particularly graphically. Thankfully, the hard-working modding community has made a plethora of mods which dramatically improve the game's appearance, adding 4K textures, removing that weird green tint from everything and improving lighting and draw distance to more realistic levels (as well as easing the game's weirdly restrictive memory limit, that left the game still chugging for people with monster graphics cards). I'll address how to add those to the game in a future post.

I spent 35 hours replaying Fallout 3, completing the base game and the Operation Anchorage and Broken Steel DLCs (the latter of which is essential to get rid of the original's diabolically bad ending), although I still have most of the map left unexplored (including areas I never visited in my original 2008-09 playthrough). I think I'll keep a-wandering through the Wasteland a while longer. Fallout 3 is not the best Fallout game by any means or (these days) the most approachable, but it does have a unique, haunting atmosphere and an eerie beauty which the other games lack. It also took a niche gaming series that definitely did not deserve to remain obscure and turned it into one of the biggest names in video game history, and in that sense it remains inarguably the most important game in the franchise.


Thank you for reading The Wertzone. To help me provide better content, please consider contributing to my Patreon page and other funding methods, which will also get you exclusive content weeks before it goes live on my blogs. A History of the Wheel of Time, SF&F Questions and The Cities of Fantasy series are debuting on my Patreon feed and you can read them there one month before being published on the Wertzone.
Posted by Adam Whitehead at 23:32

Exploding collars is from Total recall which is way before 2000 just saying.

Another possibility is Wedlock
https://en.wikipedia.org/wiki/Wedlock_(film)
Though Running Man is earlier (1987), Wedlock later (1991). Both predate Battle Royale.