Since 2002 Bethesda Softworks have been making 3D roleplaying games set in large, open worlds which encourage exploration. Despite vast improvements in graphics technology, these games are notable for using the same basic game engine, GameBryo, throughout. In 2011 Bethesda renamed this engine "Creation" in an attempt to make it appear they were using newer technology, but it was in fact the same engine with different rendering and lighting modules. In one form or another, this engine has now powered seven games: Morrowind (2002), Oblivion (2006), Fallout 3 (2008), Fallout: New Vegas (2010), Skyrim (2011), Fallout 4 (2015) and Fallout 76 (2018), and will apparently still be powering their next two games, Starfield and The Elder Scrolls VI.


Despite the weaknesses of using the same basic codebase for twenty years (to the point where code referencing Morrowind can still be found in the files for Fallout 4 and 76), it does provide a very stable platform for modders, fans who use the engine's open nature to tinker with the makeup of the game. By adjusting files, modders can add new quests, weapons and locations, adjust the world map, fix bugs (especially useful for Bethesda games, where Bethesda are notorious for fixing just a few game-breaking bugs in an early patch and then leaving myriad minor problems unfixed, sometimes ones that recur from game to game) and - most importantly - improve the graphics of the games to keep them relevant later on.

My recent and ongoing playthrough of Fallout 3 - a game more than a decade old which frankly already looked a bit dated on release - would not have been as pleasant an experience without the presence of mods to help fix up the game. These mods do everything from dramatically improving the game's textures to reworking blades of grass so they feel more realistic and making the characters look more like people and less disconcertingly like drunk mannequins. There are limits on what can be done - no amount of modding can totally remove the slightly stodgy movement, clumsy jumping or imprecise shooting outside of VATS mode, or alleviate the vast number of identikit ruined buildings in DC - but it is the difference between the game being a cluster of microfrustrations and something that is much more enjoyable to play by 2018 standards.

Modding Fallout 3 is, fortunately, not a ruinously complicated procedure. Most of the modding process is automated these days and it's relatively simple to do or abandon and revert to the base game if you feel like playing the game in its old-skool incarnation. 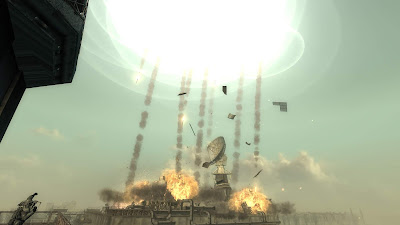 In order to mod Fallout 3 you need to do the following:

1. Have a PC (modding to this scale is not available for the PS3 or X-Box 360 versions of the game).

2. Secure a copy of Fallout 3 Game of the Year edition from GoG.com. You can mod an original 2008 boxed version of the game or a Steam version of the game, but it's far, far more work and it will be constantly challenged by the original version of the game's use of Games for Windows Live and the Steam version's flakiness when played on Windows 8 or 10, and will probably crash a lot more. The GoG version of the game also comes pre-modded to remove the GFWL launcher and also adds the LAA (Large Address Aware) Patch, which allows the game to make use of more of your PC's RAM (the 2008 version was hardcoded to use 2GB of RAM only for the game, which was ridiculous). Fortunately Fallout 3 is ten years old and quite cheap (especially if you wait for the next GoG sale around Christmas). It's probably a good idea to grab a copy of New Vegas as well from them for the same reason.

3. Bookmark the Fallout 3 page on the Nexus Mods web page. You're going to be spending a lot of time here.

4. Download the Nexus Mod Manager. This will make the process of downloading and installing mods far easier than it will be otherwise.

5. Watch this video (the same as embedded above). There are many, many videos on modding Fallout 3 out there, but this one is notable for being concise and focused solely on stabilising and improving Fallout 3, not adding loads of fan content or doing whacky stuff with the graphics that move the game away from Bethesda's original intentions. 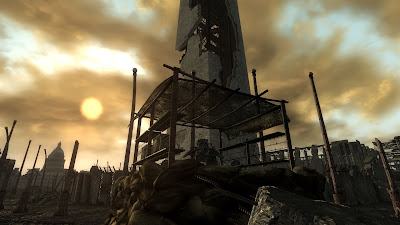 Once you've done that your're set to go. The video (by "Some Kind of Elephant") is pretty good and will take you through the basis of modding the game. The Nexus Mod page contains most of the mods you need to use. It should be noted that some of the links in the YouTube video have expired, so to find the mods just type the name into the search function on the Nexus Mod page. I'd also advise not using the DLC retexture pack addresses in the main description, as they lead to sites which triggered my antivirus software. Instead get those files from here:

One mod not mentioned in the video but which - frankly - is essential is SpeedMod v2. This mod can be used to improve your character's base walking and running speed by one of several presets, which is essential because the base speed in Fallout 3 is insanely slow. Adding this mod will prevent you from hurling something through the screen in horror at how slowly you (and everyone else) moves. The game does increase everyone's movement speed, so monsters and other characters in the game will also get a speed boost (so it won't let you "cheat" by running much faster than anyone else).

It's worth noting that the UI mod (which makes the on-screen information like health and ammunition) is only desirable if you are playing the game on a monitor which you're sitting right next to. If you're outputting the game to a TV and you're playing from the couch, you may want to leave the UI as it is for clarity.

Once that's all done, launch the game via the Nexus Mod Manager programme using the "Launch FOSE" option and you should be all set to go.


Thank you for reading The Wertzone. To help me provide better content, please consider contributing to my Patreon page and other funding methods, which will also get you exclusive content weeks before it goes live on my blogs. A History of the Wheel of Time, SF&F Questions and The Cities of Fantasy series are debuting on my Patreon feed and you can read them there one month before being published on the Wertzone.
Posted by Adam Whitehead at 20:43