Art & Arcana: A Visual History of Dungeons and Dragons by Michael Witwer

In 1974 Gary Gygax and Dave Arneson created a different type of tabletop game. Dungeons and Dragons became the world's first and most popular roleplaying game. For thirty-four years it ruled supreme and unchallenged, until a problematic fourth edition and the rise of the rival Pathfinder game knocked it off its perch. However, with its fifth edition the game has regained its crown. A key ingredient to the game's success has been the phenomenal roster of artists who have worked on the game for almost forty-five years. 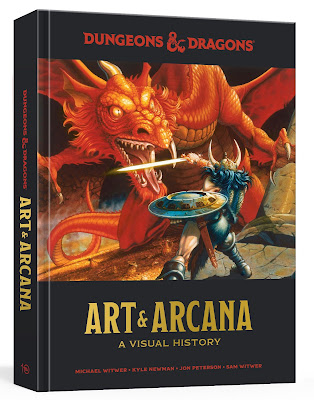 Art & Arcana is a visual history of the Dungeons and Dragons game, taking in every edition and campaign setting the game has produced, as well as many of its novels, calendars and video games. Artwork from the very first prototypes right through the latest 5th Edition expansions and modules is featured, along with lengthy histories and interviews with key personnel.

Arts & Arcana is massive: more than 440 pages in length, it features over 700 separate pieces of artwork along with a significant amount of text detailing the history of the game in some depth. It starts with Gygax and Arneson playing miniatures wargames in Wisconsin in the late 1960s and rapidly hitting on the idea of moving from large armies of lots of figures to small parties of just a few figures exploring dungeons, and later wilderness and towns. Dungeons and Dragons was born, with Gygax and Arneson founding the company TSR to sell it all over the world. 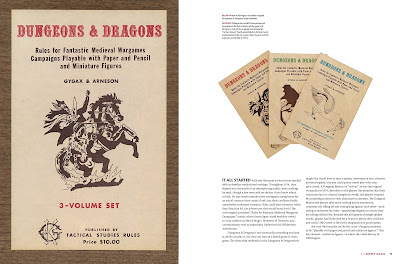 This is where the fun began.

From there the game exploded, selling millions of copies and inspiring spin-off novels, board games and a TV show. Several times the management of the game became fraught and complicated, with Gygax forced out in a corporate takeover and TSR later collapsing before being rescued by Wizards of the Coast. The game's struggles in the face of competition from video games and card games such as Magic: The Gathering are also documented, not to mention the attacks on the game in the press by fundamentalist Christians in the 1980s. The book brushes over arguably the game's nadir, the problematic 4th Edition (2008-13) and the rise of rival products to challenge the game's supremacy, but it does end strongly with the game's return to recent prominence in a new era of podcasts, YouTube videos and Twitch streams.

The one constant throughout the book is artwork. The initial artwork for the game was simplistic, sourced for very little money from whatever artists were on hand. As the game boomed in sales, so the quality of the artwork increased dramatically, with iconic artists like Larry Elmore, Clyde Caldwell and Keith Parkinson joining the company. Later on younger artists arrived with radically different styles, ready to reassess the game for its later editions. As well as artwork for the core game, they also produced art for tie-in novels and video games. 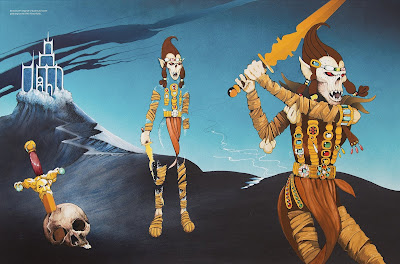 In fact, that's probably the book's biggest weakness (along with the somewhat dry and mostly controversy-ducking text): the sheer amount of material produced for D&D over the past forty-five years means that some elements get fairly short shrift in this book. Ravenloft feels a bit hard-done by in particular. There's also, somewhat bemusingly given their prevalence in and for the game, very little material on maps, although perhaps there's enough material there for a completely separate book later on.

If you can accept the fact that the book isn't exhaustively complete (and isn't meant to be, and would be far too unwieldy even if it was), there's still a huge amount to enjoy here, and the book forms probably the best and most concise history of the D&D game to date for the beginner. Art & Arcana (****½) is available now in the UK and USA.
Posted by Adam Whitehead at 15:09

Was literally just looking at this on amazon.

Sad to hear there's not much Ravenloft - how does Planescape fair? (loved DiTerlizzi's (sp?) distinctive style).

Planescape gets a few pages because of the unusual art style and the new direction it went in.