Axis & Allies & Zombies is a new variant of the classic WW2 strategy board game, which is rapidly approaching its 40th anniversary. As with most previous versions, the game pits the Axis (Germany and Japan) against the Allies (the United States, the Soviet Union and the British Empire) in a recreation of WW2, with both sides conquering territory to gain resources and using those resources to build more military units. A simple dice-rolling mechanic resolves combat and makes for a somewhat simple game, but where complex strategies can emerge. 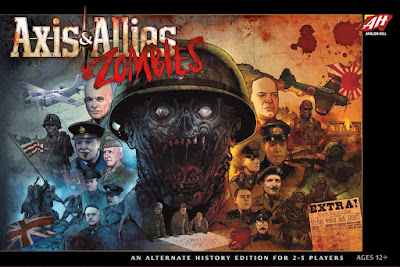 As the name suggests, this game throws the classic paradigm into disarray by adding zombies. Rather than forming a third faction, the zombies emerge as more of an environmental hazard. Fresh zombies are generated by an outbreak card deck (vaguely reminiscent of Pandemic's outbreak cards) and arise in combat, with every killed infantry unit generating a new zombie unit. Massed battles with lots of infantry, particularly on the Eastern Front, can therefore become very unpredictable with tons of zombies arising mid-battle to attack both sides. 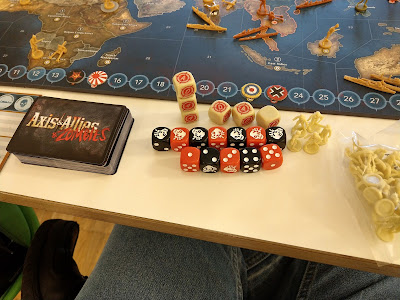 If this sounds gimmicky, well, it is. However, it is also entertaining and strategically intriguing, causing even seasoned multi-decade veterans of the game to switch to new tactics to deal with the new threat. The zombies can capture territory and, although they can't build anything, they can infect the civilian population as identified by a zombie marker on the IPC tracker. If they hit 25 IPCs, the zombie outrbreak has hit an exponential, unstoppable curve and the world ends in a zombie apocalypse. This means avoiding the zombie hordes is a bad idea as it can result in both player-controlled sides losing, but you also want to think hard about attacking them (especially with infantry). Canny players may also prefer to attack a territory, generate lots of zombies and then withdraw, leaving the defender with a huge problem to contend with. Whilst you do not need to attack zombies in your territory, any zombies in your territory get a free single attack every go they are present, forming a constant annoyance. They also block blitzkrieg moves by tanks, which especially on the Eastern Front can become a major headache as both sides try to rush reinforcements to the front lines. 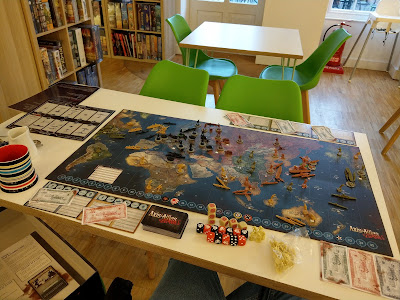 The card mechanic also adds a wonderful random element to the game. Those small British forces in Africa can suddenly get bogged down in fighting zombies instead of mobilising to meet the Desert Rats, and the normally-unreachable US mainland can suddenly see heavy fighting as zombie hordes surge up from South America. New technologies also allow for one (or both) sides to manipulate the zombies into fighting for them, or generate new weapons more capable of defeating the zombies en masse (like chainsaw tanks) or stopping fallen soldiers rising to join their ranks. 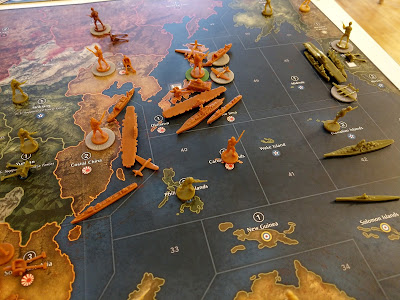 The result of this is a fresh spin on an older, fun but, it has to be said, somewhat predictable game. Furthermore, the game package also allows for a few other options. First, you can completely ignore the zombies and play this as an introductory game of Axis & Allies. The map is much smaller, with fewer territories (although not quite as few as 1941, which streamlined things a bit too much) and more simplistic strategies. The game plays faster (without the zombies; with them it lasts about as long as a standard A&A game, 3-5 hours depending on dice rolls) and also drops units such as AA Guns and Cruisers whilst also ignoring rules such as air drops and building new factories (veteran AA players can, of course, reinstate these if they wish). In short A&A&Z has enough in the box to play as both the zombie game and Axis & Allies 1941. 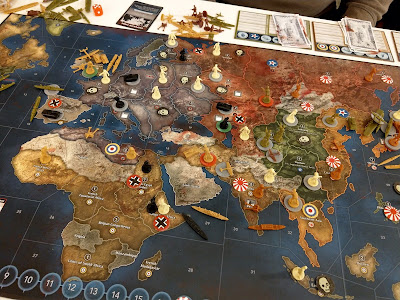 Secondly, the game has a second deck of cards which can be used (in conjunction with the zombie pieces) with Axis & Allies 1942 to play the zombie game on a larger scale, which should also be enjoyable for those who want to make their standard base games more unpredictable and complex. There aren't any rules for adding the zombies to A&A Anniversary Edition or the 1940 Europe/Pacific/Global games, but I daresay fan-made variations will emerge in time.

Thirdly, the game reintroduces paper money to the mix, which was missing from both the 1941 and 1942 editions of the game and, of course, can be used with those games without any problem. 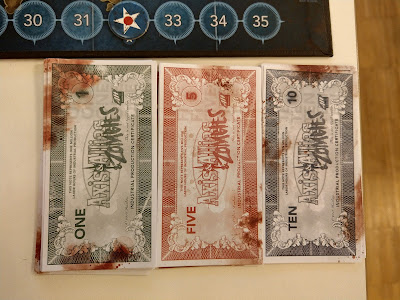 Minuses are somewhat limited. If you hate zombies and find the idea gimmicky, you'll already have moved on. The game is a bit stingy with pieces and the poker chips (to represent multiple units), but not as much as the WW1 and 1941 versions of the game. On the reverse side, this keeps costs down, resulting in, by far, the best value-for-money Axis & Allies game to date.

In summary Axis & Allies & Zombies (****) is a fun, fresh and a great way of introducing new players (who might otherwise be put off by the serious theme and perceived complexity) to the game, and creates new tactical situations which veterans may find interesting to deal with. The game is available now in the UK and USA.
Posted by Adam Whitehead at 21:25