The Tombs of Atuan by Ursula K. Le Guin

Tenar is the high priestess of the Nameless Ones. She serves at the Tombs of Atuan, deep within the Kargish Empire, a place of rote and ritual. Despite the importance of her role she feels lonely and listless...until the day a wizard comes to her island. 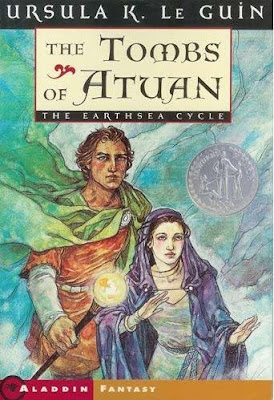 The Tombs of Atuan (originally published in 1971) is the second novel in Ursula K. Le Guin's classic Earthsea sequence of novels, set in an enormous archipelago. It is not a direct sequel to A Wizard of Earthsea, the preceding novel, and in fact feels like a companion book more than a successor. The book focuses almost exclusively on the new character of Tenar, with the book's connection to A Wizard of Earthsea not becoming clearer until later on.

Tenar is an interesting character and it's a surprise to learn that she is Le Guin's first major female protagonist. Tenar is painted in Le Guin's traditional depth, as we get to know this young woman who combines curiosity, ruthlessness, loneliness and leadership skills. The book also inverts its presentation of Ged from the earlier novel. A Wizard of Earthsea was, for all of its travelling and epic journeys and mighty set-pieces, a deeply internal story of a boy finding out who he really is and making peace with himself. The Tombs of Atuan, being told entirely from Tenar's POV, instead allows us to meet and see Ged as strangers see him, wholly externally with only hints at what's going on under the surface. Thus our understanding of the main character of the series is expanded.

Le Guin's prose is powerful and evocative, and it's interesting in this novel that she flips the setting and feel of the earlier book on its head. A Wizard of Earthsea took place on land and sea under the sky, with the wind blowing in the characters' faces and freedom all around them, even as they were forced into a confrontation with a dark force they didn't understand. The Tombs of Atuan takes place almost entirely underground, our characters sometimes literally stifled and near-entombed under the earth, in claustrophobic surroundings. Le Guin nails this oppressive, stifled atmosphere and the elation the characters experience when they finally escape (not a spoiler, hopefully, since this is Book 2 of a six-book series).

There are some weaknesses to the novel. This is a short book, but even so, it does feel like an extended single episode rather than a novel-length narrative. Indeed, the book started as a short story for a magazine and had to be expanded to a longer word count for commercial reasons. It feels like maybe this should have been the opening section of a longer novel exploring more of Tenar's character (and it feels like her development is cut off just as it was starting to get interesting, and won't be revisited until the fourth book of the series) or remained as a short story. As it stands, the story feels a bit too slight and claustrophobic to sustain a full novel, despite the strengths of the writing and characterisation.

The Tombs of Atuan (****) is a slight story and perhaps a tad underwhelming compared to A Wizard of Earthsea, but it remains an ambitious and fascinating novel. Le Guin's writing power and her mastery of character is on full display. It is available now in the UK and USA as part of The Books of Earthsea omnibus edition.
Posted by Adam Whitehead at 20:55