On 8 December 2003, the Sci-Fi Channel aired a two-part TV movie based on Glen A. Larson's 1978 space opera, Battlestar Galactica. This new show had been preceded by very low expectations: none of the cast or crew of the original show was involved, and two previous reboot pitches which had been direct sequels to the original show had been cancelled in favour of a total remake. Redesigns of iconic ships and vehicles had annoyed the original fanbase, as had the "gender-swapping" of established characters like Starbuck and Boomer. However, early critical reviews were positive and some of the casting for the show, such as Edward James Olmos as the new version of Commander Adama (in the role played by Lorne Green in the original) and Mary McDonnell as the new President of the Colonies, seemed promising. 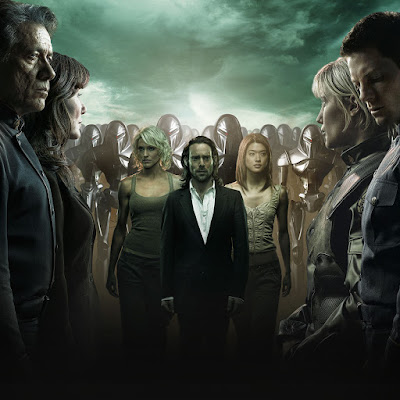 The road to relaunching Battlestar Galactica had been a long one. ABC had commissioned Glen A. Larson to create the original show back in 1977, keen to launch on the bandwagon of space opera and impressive visual effects generated by the release of the original Star Wars movie. They even brought in John Dykstra, who had created Star Wars's special effects, to work on the show. Borrowing heavily from Egyptian mythology and Mormon theology, the show told the story of the annihilation of the Twelve Colonies of Man at the hands of a hostile alien race, the Cylons, consisting of cyborg leaders and fully-robotic soldiers. The last surviving human warship, the battlestar Galactica, leads a "ragtag fugitive fleet" in search of the mythical Thirteenth Colony, also known as Earth. Despite schmaltzy acting, the presence of cute kid and animal actors (including the still-bizarre decision to have a chimp playing a robot dog) and whiplash-inducing shifts in tone, the show built up a strong following for its impressive effects and its emphasis on family.

The show launched to enormous ratings, but these fell drastically over the course of the first season. Combined with the show's eye-watering cost, ABC decided to cancel it and resurrect it two years later as Galactica 1980, a much lower-budged show meant more to appeal to kids. Galactica 1980 holds a strong claim to be the worst TV show ever made (with the solitary exception of a flashback episode set during the original series) and was quickly put out of its misery. 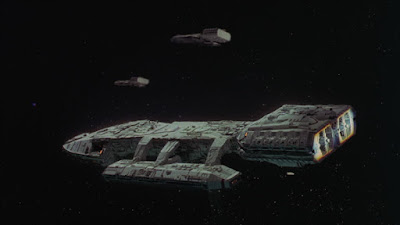 The original Battlestar Galactica had spectacular visual effects for 1978 but less impressive scripts.

Larson moved on to other projects, but always felt there was more mileage in the Battlestar concept. Richard Hatch, who'd played Captain Apollo on the original series, agreed, and with Larson's blessing undertook various attempts to relaunch the show. Successful novel and comic series followed through the 1980s and 1990s and in 1998 Hatch produced a proof-of-concept video dubbed Battlestar Galactica: The Second Coming. Ignoring Galactica 1980, this would have been a "next generation" concept picking up on the story twenty years later with the Galactica crew still searching for Earth with a whole new generation growing up in the fleet. Despite being popular at fan conventions, the idea did not find fertile ground with a studio. A year later Glen A. Larson started developing a movie concept which would have followed up on the fate of the battlestar Pegasus from the original series, but again this didn't get very far.

A much more serious attempt followed in 2000. Producers Bryan Singer and Tom DeSanto were the hot flavour of the month in Hollywood for the success of their movie X-Men and Singer, a huge fan of the original Battlestar Galactica, was determined to get the show launched again. His concept was similar to Hatch's and would have been a next generation reboot. Fox TV signed on, but were somewhat sceptical that BSG's relatively small fanbase could help propel the show to a larger audience, especially as it was a continuation. Nevertheless, the project moved to within a few weeks production starting (including some early set construction and lots of concept art being produced) when Fox put all new projects on hold in the wake of the 9/11 terrorist attacks. Fox were slow to get the show moving again, so when Singer and DeSanto left the project to focus on the next X-Men movie, Fox let the idea lapse. 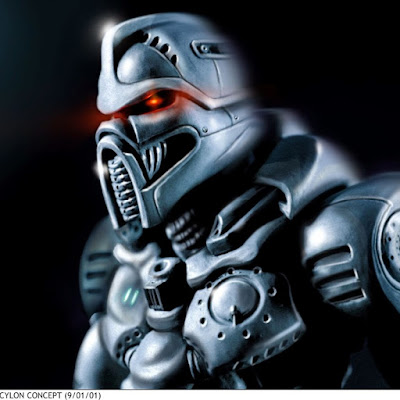 Universal Pictures, who held the rights to the original BSG, decided to push forwards with a new version of the show themselves. Whilst 9/11 had disrupted Fox's plans, Universal saw it as an opportunity to tell a very different kind of story. Critics of the original BSG - and even some fans - had felt that the original series had massively undersold the darkness and trauma that would have resulted from the destruction of twelve planets and billions of human beings on the survivors. Universal asked producer David Eick to work on ideas for the new series, but the first directive was that this was going to be a page one rewrite and remake set in a new continuity. Eick decided he needed to bring on board someone who really understood science fiction and in particular space opera and brought on board a writer named Ronald D. Moore.

Moore had cut his teeth as a very young writer on Star Trek: The Next Generation, which he'd joined in 1989 in its third season. He was just about the only staff writer to survive the chaotic third season into the fourth, and became a key creative lead on the show in its latter five seasons. When the show wrapped, he co-wrote the movies Generations and First Contact as well as moving over to Deep Space Nine for its third season, again playing a key creative role on that show. When Deep Space Nine wrapped in 1999, he moved over to Star Trek: Voyager but immediately found a much more restrictive creative environment. Moore was in particular frustrated by the fact that the starship Voyager was still clean and pristine despite being trapped on the other side of the galaxy with very limited chances for resupply. His feeling was that the show should have been darker, more challenging and engaged in more morally murky discussions about the morality of the Federation when a ship was put in a difficult position. The producers disagreed, feeling that cookie-cutter philosophising and constantly hitting a big red reset button at the end of every episode was the way forwards instead. Moore duly quit, going to work first on Roswell at the WB and then Carnivale at HBO. 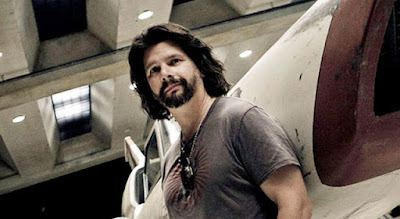 He was still working on Carnivale when Eick called. Moore had watched Battlestar when it first aired and seen great promise in it, but had also disliked the campy and sillier elements of the show (such as the cute kids, robots and the "casino planet" in the pilot). He rewatched the pilot movie and realised there was a lot of strength in the basic premise and agreed that it could be reworked in a post-9/11 environment for greater emotional impact. He agreed to write a new pilot for Universal's subsidiary, the Sci-Fi Channel (now SyFy). This ballooned into a (relatively) high-budget three-hour mini-series which could also work as a backdoor pilot for a full series.

Moore penned the pilot and oversaw some elements of production, including exercising his desire for a slightly darker aesthetic than Star Trek and to have a completely new (for SF) way of shooting the action with handheld cameras, even the space scenes. Director Michael Rymer immediately locked into what Moore was thinking of and his directorial style immediately became a hallmark of the show. Moore also wanted a more understated and less symphonic way of doing music for a space series and lucked out when Richard Gibbs also picked up that idea and ran with it. A young composer named Bear McCreary also assisted Gibbs on the pilot. 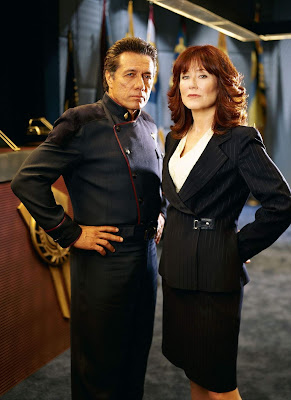 Casting proved interesting but controversial. Moore wanted distinct actors with gravitas and experience, but was aware that it was very unusual for producers to get their first choices. In this case, he wanted Edward James Olmos for Adama and Mary McDonnell for Roslin and was flabbergasted when both said yes, sold on the quality of the scripts. The casting department also scored a steady series of successes when they found a lot of fresh young talent for the series, from Jamie Bamber for Apollo to James Callis for Baltar and, most iconically, Katee Sackhoff as Starbuck and former model Tricia Helfer as Caprica Six. Established fans of the show were furious to learn that both Starbuck and Boomer (to be played by Grace Park) had been changed from male characters to a female one for the show and some of the original castmembers agreed with them: Dirk Benedict (who played Starbuck in the original show) scathingly referred to the new character as "Stardoe".

For visual effects, the team at Zoic were called in to produce the huge amount of CGI needed for the mini-series. Zoic had just come off the back of Joss Whedon's newly-cancelled Firefly so the commission was good news for them. The CG team included many veterans of both Babylon 5 and Deep Space Nine, who relished on rendering effects on a new, more powerful hardware and having the ability to design lots of new ships, although honouring the designs laid down in the original show. 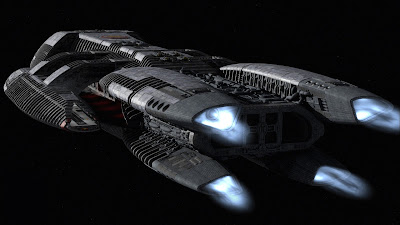 The Battlestar Galactica mini-series was critically acclaimed on its release. The reviews were excellent across the board, with a lot praise for the actors, direction and acting, and the ratings were very high, setting new records for SyFy. It was an easy choice to commission a full first season, especially once Ron Moore confirmed he would drop Carnivale (which was being torn apart by corporate politics and would be cancelled after its second season) to move over as full-time showrunner. When the first season proper debuted a year later, with 33 (the episode that won the show a Hugo Award), it was even better.

Of course, the show could not quite sustain that early acclaim and eventually went off the rails, but that's another story. Battlestar Galactica did for space-set science fiction what Game of Thrones later did for epic fantasy, making it grittier, more real and more resonant with a wider audience previously dismissive of the art form. It's a shame we haven't seen more shows come along in its wake, but finally, with shows like The Expanse, it seems that promise has come good. Battlestar Galactica remains, despite its declining quality later on, one of the strongest SF TV shows ever made, and essential viewing for any fan of the genre.
Posted by Adam Whitehead at 19:08

I can't believe that Battlestar Galactica is 15 years old! I also can't believe that SyFy didn't follow up BSG with more shows similar to it, or at the very least more space operas. They should really invest in Willful Child by Steven Erikson. That would be a great series