Cult 2014 movie What We Do in the Shadows, which brought the genius of Jermaine Clement and Taika Waititi to a worldwide audience (leading to the latter's involving in directing Thor: Ragnarok and working on the new Star Wars TV show), has now spawned an entire related universe, with two TV shows already in production and a sequel movie in the planning stages. 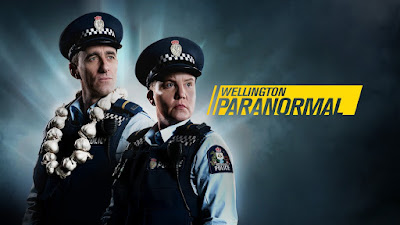 First up is New Zealand-based Wellington Paranormal, which follows hapless cops Kyle Minogue and Officer O'Leary as they investigate weird goings-on in the Wellington area. Minogue and O'Leary appeared several times in the movie as the easily-hypnotised cops constantly getting involved in the vampires' misadventures. A first season of 13 episodes has already aired and a second season has been commissioned for 2019. So far an international distribution deal has not been signed, but I wouldn't be surprised to see this showing up on Netflix or Amazon before too long.


Next in rotation is a more direct TV version of the movie, also called What We Do in the Shadows. Production of Season 1 is already complete and this should air on FX in the States in early 2019, with Netflix or Channel 4 likely to pick up the UK transmission rights. What We Do in the Shadows is set in New York City and stars Kayvan Novak, Matt Berry, Nastasia Demetriou and Harvey Guillen. Despite early reports that the TV show will be a remake of the movie, it's actually an all-new story with a new cast of characters. The events of the TV show are set in motion when a minion of the old vampires of Europe arrives in the New World to see how the vampire conquest is going after 400 years, only to find they haven't managed to get off Staten Island. Shenanigans ensue.


Waititi and Clement are also developing a sequel to the movie. Called We're Wolves, the film will catch up on the wolf pack established in the first move and explore their lives in a similar mockumentary style.

Clement and Waititi have confirmed (albeit possibly with tongue firmly in cheek) that they see the movies and TV shows as all taking place in one big universe (possibly Waititi's exposure to the Marvel and Star Wars universes coming through there) and there's a chance characters from the original movie may show up in both TV shows in some capacity.
Posted by Adam Whitehead at 21:09

Email ThisBlogThis!Share to TwitterShare to FacebookShare to Pinterest
Labels: jermaine clement, news, taika waititi, wellington paranormal, what we do in the shadows

Love the writeup! Only a minor correction: Jemaine Clement’s name doesn’t have an ‘r’ in it. :)

Wellington Paranormal has six episodes in season 1 and the name is Mike Minogue, though in fairness they missed a trick not calling him Kyle Minogue.