The dawn of civilisation. Stone Age hunter-gatherers give way to Bronze Age farmers and Iron Age warriors. Across the world tribes are rising to greatness, founding villages that will become the first great cities and then the centres of vast empires. 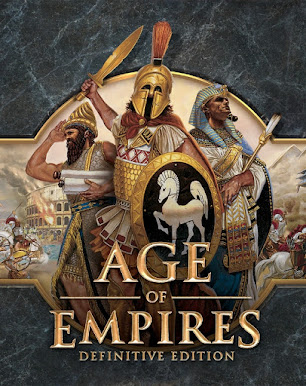 Age of Empires, released in 1997, was a late addition to the real-time strategy genre, following on the heels of WarCraft (1994) and Command and Conquer (1995) and released almost simultaneously with Total Annihilation (1997). Whilst the other games in the nascent genre were fantasy or science fiction in genre, Age of Empires drew on history for its inspiration, and was particularly inspired by the historical, turn-based Civilization series.

Age of Empires is, at heart, an RTS as usual. You start off with a base - in this case a town centre - and can build worker units from the base. These gather resources, which can be used to construct further buildings, which in turn producer military units (archers, infantry, cavalry and ships) you can then take into battle. So far, so standard.

Age of Empires does do a few things differently, though. There's a huge amount of emphasis placed on support buildings which offer upgrades: send your 20 non-upgraded infantry guys into battle and they're likely to get slaughtered, but carefully choose from a selection of weapons and armour upgrades (you're rarely so flush with resources that you can upgrade everything) and they can turn into tanks capable of absorbing twice as much damage and dealing out more.

Resources are divided into several types: food is plentiful (effectively infinite, once you've researched upgraded farms) and wood is usually commonplace, but gold and stone can be much harder to track down and will require aggressive early exploration of the map and the securing and defending of resource points. Once you have a steady stream of resources, you have to protect them (sometimes a difficult task if you end up with half a dozen resourcing operations going on in remote parts of the map) and you also have to strike a balance between gathering resources and going on the offensive: the campaigns have a tight default limit of 50 units between both resource-gatherers and military forces, and it's not uncommon to have so many workers doing stuff that you realise you can't sustain an army of more than 10 or 15 guys. Go the other direction and you may end up with a nice, big army, but not enough resources coming in to replace losses in the field at a sufficient clip. There are some ways of increasing the population gap to sidestep this problem, though. One nice touch is that you can sometimes get the same resource from different sources: food can be acquired by any mixture of farms, hunters, berry-pickers and fishing boats. 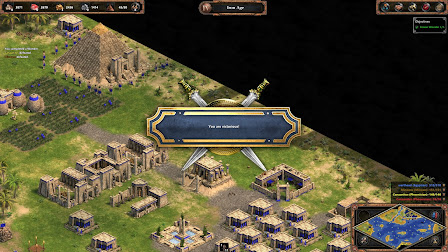 The game is also notable for its slow pace versus its competitors: units take ages to build, and making your way through the tech and research tree can be slow going. The first two campaigns in the game do a good job of indulging this pace, but then the next few throw that out in the window and encourage a much more aggressive playstyle, which can be jarring. You can overcome the slow building issue by building more unit production centres (so construct four barracks rather than one), but this obviously stretches your resources even further.

Age of Empires does a lot right. The more complex resource management and pared-back military operations make this a somewhat more thoughtful game than its contemporaries, but also one where levelling up satisfyingly and getting a good loop of resource-gathering and then military deployment going can be tricky. The game is more challenging on this level than, say, Red Alert or WarCraft II, which both encourage and reward a far more speedy and aggressive commitment to warfare and much more simplistic resource management. There's also a nice historical intro and debriefing after each mission, setting events in a genuine historical context.

Unfortunately, there are a lot of problems. The Definitive Edition of the game, despite remastering the game's graphics beautifully, does not fix some of the old problems and introduces new one. Pathfinding is excruciating, perhaps the worst of all the classic RTS games, with armies in particular taking absurd routes to get to their destinations. There's little to no ability to control formations, so your slower, heavier tanks will simply fall behind your speedier skirmishers rather than staying in front of them to soak up damage. It does feel like almost every building takes twice as long to produce units as it really should, making for slow going at the start of each map.

There's also a plethora of bugs in the game. The most annoying is one that the game will sometimes "merge" a number of units standing near one another into some horrible mutant gestalt, like Jeff Goldblum in The Fly. The gestalt may break apart into its constituent members at some point, or stand there (presumably screaming in existential terror) until you put it out of its misery. Needless to say, it is incredibly irksome if half of your army decides to fold into a gibbering mass of limbs just before you launch your final assault on the enemy stronghold.

Another bug is related to difficulty. For some reason, the game defaults to the hardest difficulty on several missions rather than using the difficulty you've actually selected. This makes for unpredictable difficulty spikes where the game becomes so challenging it's borderline unplayable at times (and Age of Empires comes from that time period when "Hard" in games meant "actually really hard"), not helped by the pathfinding and units-merging issues.

The bugs, unfortunately, are prominent enough that they make playing and enjoying the game today much more challenging than it should be. When the bugs aren't happening and the player can get on with the game, there is enjoyment to be had. Unfortunately, this becomes more infrequent the deeper into the game you proceed.

Age of Empires: Definitive Edition (**½) is a beautiful-looking game and there's some fun to be had here (especially in the earlier campaigns), but a number of annoying bugs gradually escalate to make playing the game much more of a chore than it should be. The refusal to improve either the game's pathfinding or the sometimes-dunderheaded AI may have made a game that's true to its roots, but also one that's definitively been made obsolete by other games, most obviously the Definitive Edition of its own immediate sequel, Age of Empires II: Age of Kings, as well as the splendidly-updated Age of Mythology. Age of Empires: Definitive Edition is available for PC now.