The crew of the Rocinante - in dry dock at Tycho Station for repairs - have split up: Amos is headed back to Earth to see to some outstanding business, whilst Alex is heading to Mars to see his family. Also on Mars is Bobbie Draper, who has uncovered a possible criminal conspiracy involving elements of the Martian military. Naomi has also left for Pallas, hoping to find her long-missing son. Former UN Secretary General Avasarala is on Luna, finding it hard to adapt to her new role away from the centre of government power. Drummer has found a new crew and a new family, but her old Belter loyalties are being tested. When a massive terrorist strike on an unprecedented scale takes place, the scattered crew of the Rocinante have to find their way back together across a Solar system suddenly plunged into war and fear. 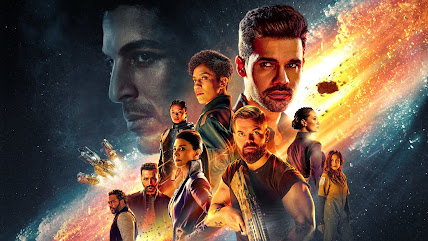 Ever since the Expanse TV series launched in 2016, fans have been hoping it would make it as far as the events of the fifth novel in the series, Nemesis Games. Widely-regarded as the best book in the series, Nemesis Games manages both a large-scale, epic story combined with much more personal stories tightly focused on each of the crewmembers of the Rocinante. This allowed it to effectively cover a huge storyline from multiple vantage points located all around the Solar system.

The TV show, fortunately, more or less nails the landing. The first half of the season is tense and taut, delivering a countdown to Armageddon, exploring the event as it happens and then the immediate aftermath. All of the actors do good work, with Wes Chatham in particular turning in a great performance as Amos finds himself effectively the disaster relief coordinator for a small band of survivors of the disaster. The first half of the season is an unabashed triumph and might be the best run of episodes in the show's history.

The second half of the season is still good, but less effectively-paced. Having gotten the good stuff out of the way early on, the rest of the season feels locked into a holding pattern: Naomi is in a prison cell; Amos and his band of fellow survivors are trying to find a ship to escape; Bobbie and Alex are sitting in chairs on a spaceship; and Holden and a bunch of newer and older characters are sitting in chairs on their spaceship. Amos's storyline at least allows for more dynamic action and character interplay, even if the "will humanity hold together after an apocalypse or turn on one another?" question feels a bit redundant after decades of post-apocalyptic shows, books and movies, but everyone else is spinning in circles for much of the second half of the season.

Still, The Expanse is decent in its quieter moments as well as the loud ones and we get some good stuff here, particularly for Naomi as she has to embark on possibly the chanciest escape plan you'll ever see. Dominique Tipper gives a reliably outstanding performance as she has to guide Naomi through the toughest test she's ever faced, this time without the backup of her crew. Amos has his own mini-finale in the penultimate episode, including the show's most ambitious ground action sequence (which unfolds via what appears to be a single, long, continuous shot) to date, which is handled very well.

Things come together in the season finale, one of The Expanse's strongest episodes to date, setting things up for next year's final season. In fact, it's a bit bewildering that they're still following the books so closely (including material which is setup for Books 7-9, which are not being adapted in the show, or at least in this show) when it feels they should be closing things down for the final run of episodes.

Season 5 of The Expanse (****½) isn't quite the show at its best, but it's damn close. The flabby pacing at the end of the season is a problem which could have been resolved by bringing in more elements from the sixth book, Babylon's Ashes, but otherwise this is an outstanding season of television. The Expanse's position as the best space opera TV show currently airing remains unchallenged. The season is available to watch worldwide now on Amazon Prime Video.

As someone who's read the books but not following the internet around the show I watched the finale of Season 5 and just about jumped out of my chair when the show that I'd been watching so faithfully adapt the books went hard right-angle turn on me and veered so far off course I needed to rewind and double check. I sill wasn't sure until a character later confirmed it. It seriously deviated from the books in a massive way.

I immediately went on to reddit to find some answers and was disappointed to discover real-world actor/studio politics and behaviours had led to a last minute offing of a major character and some hasty re-shoots and CGI editing to try and make the season finale work after it had obviously already been finalised. But if you watch it carefully, the rest of that episode just doesn't make sense at all. At least, not with the emotional investment the main crew have shown towards each other previously.
It sucks when "real life" situations lead to show and casting changes. Changing Avarasala's husband was incredibly obvious but relatively easy to overlook since he wasn't in it much, but far out, I wonder how they'll recover from this. Supposedly this has nothing to do with confirmed 6 season total (which I also didn't know about), but I'm really bummed about the show now. There are no obvious character replacements available that I can think of, that would fill the earth/mars/belt quotas within the now-vacant professional role on the Roci either.

Just bloody sad stuff all around.

I agree about the holding pattern of the latter half of season 5 though. I feel like they could have condensed Naomi's arc trapped on the boat into an episode and created some more interesting side-story stuff with other characters, like peaches. Oh well, it's done now. All in all, a great show but this has cast a shadow on it for sure.
Let's see how it will recover.

I’ve only seen the first two series and really enjoyed it. I bought a Firecube and will binge the remainder of the series shortly.

From what I have read, the series has followed the book quite closely.