Adrian Tchaikovsky's debut series, The Shadows of the Apt, is now available in ebook for the very first time. 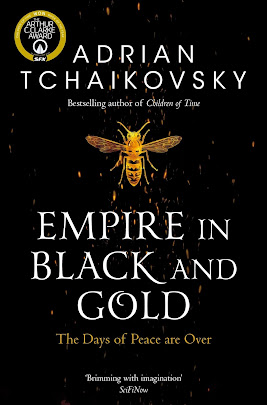 All ten books have been recorded in full by actor Ben Allen and the first four are now available from Audible, Kobo and other services. The other six will follow later in the year. I reviewed the first four books (Empire in Black and Gold, Dragonfly Falling, Blood of the Mantis and Salute the Dark) about ten years ago and enjoyed them, must didn't press on with the series, a lack I must rectify.

The series is set in a world dominated by human societies and cultures which have taken on the traits of insects. The series begins with an invasion of the divided, feuding Lowlands by the Wasp Empire, and the desperate attempts to stop them by turning advanced technology against them. As the series progresses, new races are discovered, other powers rise to the fore and technology advances on, moving through the steampunk era to something more reminiscent of WWI. As with most of Adrian's work, the series is noted for its accessibility, impressive characterisation and solid pacing (the series is not one continuous ten-book saga as such but is divided into several sub-arcs).

The series:
Posted by Adam Whitehead at 11:51

Email ThisBlogThis!Share to TwitterShare to FacebookShare to Pinterest
Labels: adrian tchaikovsky, audiobooks, shadows of the apt

Only the first four are out now. The remaining six are only available for pre-order and will be released by the end of the year.