The publishers have confirmed a blurb for Brothers of the Wind, Tad Williams' next novel set in the world of Osten Ard. 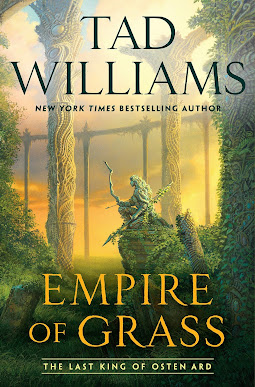 This isn't the concluding novel in the Last King of Osten Ard trilogy, The Navigator's Children, which is expected later (Williams has already completed the novel and has been revising it for some time), but a new, short prequel book set a long time before the events even of The Dragonbone Chair (the first novel in the Memory, Sorrow and Thorn trilogy).

Pride often goes before a fall, but sometimes that prideful fall is so catastrophic that it changes history itself.

Among the immortal Sithi of Osten Ard, none are more beloved and admired than the two sons of the ruling family, steady Hakatri and his proud and fiery younger brother Ineluki - Ineluki, who will one day become the undead Storm King. The younger brother makes a bold, terrible oath that he will destroy deadly Hidohebhi, a terrifying monster, but instead drags his brother with him into a disaster that threatens not just their family but all the Sithi - and perhaps all of humankind as well.

Set a thousand years before the events of Williams's The Dragonbone Chair, the tale of Ineluki's tragic boast and what it brings is told by Pamon Kes, Hakatri's faithful servant. Kes is not one of the Sithi but a member of the enslaved Changeling race, and his loyalty has never before been tested. Now he must face the terrible black dragon at his master's side, then see his own life changed forever in a mere instant by Ineluki's rash, selfish promise.

Kes and his master will range the world, risking countless dangers and meeting both mortals and immortals of many kinds as they try to undo the tragedy that springs from Ineluki's fatal pledge. During this journey, the seeds are planted for events that will culminate centuries later in the Storm King's War in Memory, Sorrow, and Thorn and the dreadful Norn Queen Utuk'ku's assault on humanity in The Last King of Osten Ard.

In the end, Pamon Kes must question everything about his life - and risk everything, too - as he struggles to save his beloved master, Hakatri. But will anything Kes does be enough? Or has Ineluki's rash promise already set the entire world on an unstoppable course toward destruction?

Brothers of the Wind was previously scheduled for release in June 2021, although the UK publishers and several online bookstores are now showing it for release in November 2021, with The Navigator's Children to follow in October 2022. These dates are likely placeholders and I hope to confirm those soon.

Email ThisBlogThis!Share to TwitterShare to FacebookShare to Pinterest
Labels: brothers of the wind, tad williams, the last king of osten ard, the navigator's children