Netflix is reportedly closing in on a showrunner for their live-action version of Avatar: The Last Airbender. 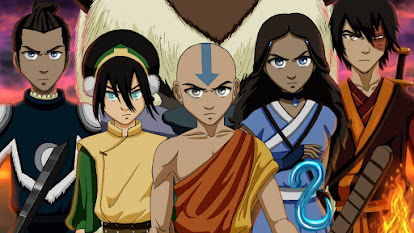 Albert Kim was previously a writer-producer and later showrunner on Sleepy Hollow and Nikita, and a writer on Leverage and Dirt. The reports indicate that Kim may already have the gig, or been offered it.
He inherits a poisoned chalice: whilst the prospect of a live-action Avatar: The Last Airbender TV series remains intriguing, the project was tarnished when creators and original showrunners Michael Dante DiMartino and Bryan Konietzko quit last year, citing repeated creative interference and an apparent unwillingness by Netflix to allow them to make a faithful adaptation of the original show.
The original reports indicate that Netflix have indeed requested more changes, including aging up the character of Katara to 16 and reducing the age of her brother Sokka to 14. Aang is still 12. This change - although only rumoured at present - indicates massive changes to the character dynamics. It seems much less likely that an Aang/Katara romance (a key plot point of the original) will be on the cards, and it's less clear if Sokka's growth as a warrior and eventually a military strategist will still be a part of the story (although Sokka's age has only been dropped by one year, so it's possible this arc will still unfold). Some fans have speculated that the change was done to allow Netflix to cast an older actress for Katara, and the possibility of instead pursuing a relationship angle with the character of Zuko (a popular fan-ship in the original series).
In the meantime, Avatar: The Last Airbender has become the most popular animated series on Netflix since it started airing a few months ago, an impressive achievement for a show that is now sixteen years old. DiMartino and Konietzko have indicated a potential willingness to return to the world for more animated stories (similar to their previous spin-off show, The Legend of Korra), but it's unclear if there is a firm plan in place.
Reportedly, Avatar: The Last Airbender should start shooting later this year for a 2022 debut on Netflix.
Posted by Adam Whitehead at 22:45

Good on them if they ditch the Aang-Katara romance, easily the weakest part of an otherwise first-rate show. As a sucker for well-motivated love stories, that one was an exercise in confusion and frustration. Nothing made the show feel more episodic than filler episodes of season 2 and 3 (The Cave of Two Lovers, The Headband) brimming with actual romantic tension that was entirely absent from the plot episodes.

That is, until they introduced the Guru and the shakras, and things really went off the rails continuity-wise. Aang having to "give up" Katara (whatever that meant in practice) to activate the Avatar state - and then the show just forgot that point and made up something about hitting his execution scar on a rock instead.

The ship bravely tried to put itself out of its misery in The Ember Island Players, with Katara rejecting Aang - but they reversed that one as well, to give Aang an anti-climatic girl-as-reward kiss in the end.