Game of Thrones composer Ramin Djawadi is heading back to Westeros, as he has confirmed that he will be scoring the prequel, spin-off series House of the Dragon as well. 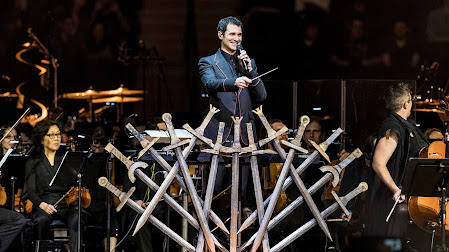 The news comes courtesy of Djawadi's online CV, which was recently updated to confirm his work on the series.
Djawadi's work on Game of Thrones over all eight seasons won substantial critical acclaim, including two Emmy Awards. His other work includes films such as A Wrinkle in Time, The Great Wall, Pacific Rim, WarCraft and Iron Man. He is currently working on the Marvel movie, Eternals.
Djawadi's work was on GoT was always excellent throughout the show's run, and he has successfully toured with a full orchestra and the soundtrack to the show several times. Djawadi returning for House of the Dragon will be good news for many fans, even if he will have his hands full trying to come up with a main title theme as memorable as that of the mothership series.
Thanks to Los Siete Reinos for the heads-up.
Posted by Adam Whitehead at 19:03