Ty Franck and Daniel Abraham - better known as gestalt SF author James S.A. Corey - have agreed to contribute a story to the resurrected Last Dangerous Visions, an SFF anthology conceived by the late Harlan Ellison in the 1970s but not published in his lifetime. 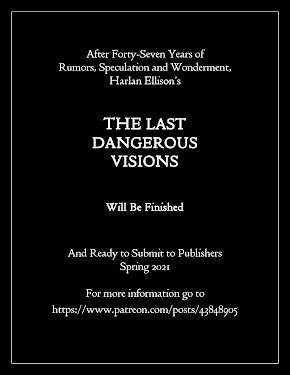 Ellison passed away in 2018 but his legal executor J. Michael Straczynski has proceeded with plans to publish the collection, including updating it with new stories from some of modern SFF's big names, as well as a debut work by a new author. Neil Gaiman had also previously agreed to work on the project.

The plan is to submit a copy of the complete work - which will be substantial in size - to publishers by the end of May this year for publication.

The project has drawn a mixed reception from SFF fans and commentators, some noting relief that something will at least be salvaged from the long, long-gestating project, others feeling the project should have been left to die. Others continue to express scepticism the book will ever be published, despite Straczynski's considerably more reliable reputation compared to Ellison. People will be able to make up their own minds on the merits of the project when it does eventually hit the shelves.