The long, long-missing THE LAST DANGEROUS VISIONS will be published in 2021

Confirming speculation from earlier in the week, SFF scriptwriter J. Michael Straczynski, acting in his capacity as the executor of the Harlan Ellison Estate, has announced that The Last Dangerous Visions will finally be published in 2021. 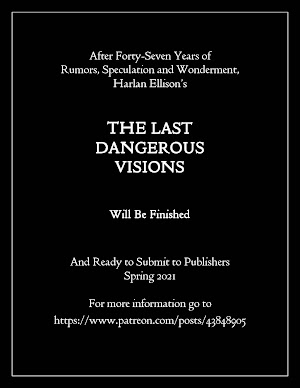 The book is the third in a series of anthologies collecting the brightest and best SFF of the time. The first two books, Dangerous Visions (1967) and Again, Dangerous Visions (1972), were hailed as being groundbreaking and seminal in codifying the New Wave that was sweeping the genre at the time. Ellison announced The Last Dangerous Visions in 1972, with some notion of the book being published the following year. He formally announced a contents list for the book, which had grown to a monster three-volume project featuring more than one hundred stories, in 1979. Ellison confirmed the project remained extant throughout the 1980s and 1990s, but it never appeared, with various commentators offering speculation as to why (Christopher Priest offering a somewhat withering account in The Book on the Edge of Forever). By the 2000s it was generally accepted that the book would never be published, and Ellison's passing in 2018 seemed to be make that final.

However, the stories themselves - mostly - never went anywhere. Ellison still had them, apart from a few the authors had withdrawn over the years, and there seemed to be no formal obstacle to the book being published. There were some reports that Ellison's widow was working towards that end. With her passing this year and Straczynski taking over the Estate, the way is now open for the project to be published.

Straczynski notes his plans in detail at the above link, but broadly speaking the book will consist of:

Straczynski notes that the rights to the stories that will not be used in the book are being returned to the authors (or their estates) to be published elsewhere. The rights to the stories in the first two books will also be reverted to their original authors on a non-exclusive basis, meaning that those stories can be published elsewhere (such as career retrospectives), as has been requested by some for many years.

Rather than seeking a publisher first, Straczynski is covering all the costs of the book (including advances for the new authors) out of his own pocket; fans can help contribute to the project via Straczynski's Synthetic Worlds Patreon in the meantime.

More information on the book, including the new authors to be included, will be announced in the coming weeks and months.

Assuming the various lists issued by Ellison over the years remain accurate, the book should include the last-ever stories to appear from authors such as Frank Herbert, Anne McCaffrey, Leigh Brackett, Alfred Bester, Octavia Butler, Daniel Keyes and Vonda McIntyre, making it of remarkable genre interest.

"Several of the stories have become massively outdated due to subsequent events and will not be included."

And who qualifies what is massively dated?

So even after all these years, stories that should be included are still out and will probably never see print as the authors have passed away. Yet they will find the space for new authors. Maybe they can make a new franchise too. Very disappointing decision.