KINGKILLER CHRONICLE adaptation still in limbo, being rethought as a TV project

In an interview with Entertainment Weekly, Lin-Manuel Miranda has confirmed that work remains on hold on an adaptation of Patrick Rothfuss's Kingkiller Chronicle novel series. 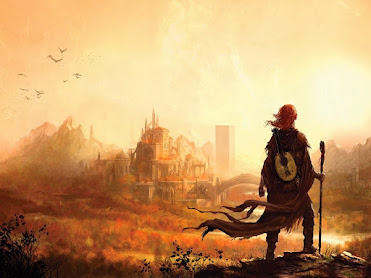 Lionsgate acquired the rights to Rothfuss's novels in 2015 and put a multi-pronged plan into operation, including a direct adaptation as a movie trilogy, a video game and a prequel TV series about the parents of the main character in the books, Kvothe. Work initially went very well, with Showtime picking up the TV project and Sam Raimi in talks to direct the film. Screenwriter John Rogers even completed the writing of all ten episodes of the planned first season of the show. Unfortunately, the project then collapsed last year. Showtime, facing massive budget overruns from its Halo TV series, cancelled the TV series and returned the rights to Lionsgate, whilst Sam Raimi withdrew from the film project.
According to Miranda, his stint playing Lee Scoresby on the BBC's His Dark Materials has given him "a new perspective" on the project, including the plan to adapt each of the three Rothfuss novels as a two-hour film. His Dark Materials is developing each of Philip Pullman's books across eight hours and even so has had to leave material out. To put this in context, the second Kingkiller novel, The Wise Man's Fear, is longer than all three Dark Materials novels combined by itself.
It sounds like the movie part of the project may therefore be dead, with a direct adaptation of the novels themselves as a TV show now the plan.
Despite this rethink, the project remains where it was with no TV channel or streamer currently attached. Reportedly Apple+ has passed on the project, meaning there aren't many more venues that might be interested. Netflix and Amazon have multiple fantasy projects (including The Witcher, The Chronicles of Narnia, Conan the Barbarian and a live-action Avatar: The Last Airbender for the former and Wheel of Time and Lord of the Rings: The Second Age for the latter) either shooting or in pre-production already and other potential partners might be holding fire to see how they pan out.
An additional problem is that the Kingkiller Chronicle remains incomplete. It's been almost ten years since the previous volume in the series, The Wise Man's Fear, was released and in July Rothfuss's editor confirmed she hasn't read a word of it and doesn't believe Rothfuss has touched the manuscript since 2014. Rothfuss himself has refused to discuss the status of the third book, The Doors of Stone, for many years, instead running online charity events and video game streaming events.
The Name of the Wind and The Wise Man's Fear are two of the biggest-selling fantasy novels of the past two decades though, having chalked up approximately 20 million sales of just two books (in comparison, Brandon Sanderson has sold around 30 million copies, but of more than two dozen books), with a formidable fanbase. If an adaptation could be well-made, it would likely be popular, but after the reception to the final season of Game of Thrones, potential partners might be wary of embarking on a similar project.
Posted by Adam Whitehead at 19:03

Email ThisBlogThis!Share to TwitterShare to FacebookShare to Pinterest
Labels: lin-manuel miranda, patrick rothfuss, showtime, the doors of stone, the kingkiller chronicle, the name of the wind, the wise man's fear

As awesome as LMM's work is, I hope that this adaptation remains dead (or in limbo if that's the preferred view) until Rothfuss completes the series, provided that ever happens.

I never understood why this series was picked up unfinished in the first place and still don't understand it. But what do I know?

The Kingkiller books themselves are in limbo - next year will be 10 years since book 2, for a book that was at one point, in some form, finished.

I don't really like seeing novels as movies (fingers crossed on Dune). Trying to cram everything in a book into two hours pretty much wrecks any novel. And rather than simply cut content, writers and directors feel the need to add their own new content, which is never as good as the original author's.

Sounds like we have a new entry in The Book on the Edge of Forever series. After The Winds of Winter and A Dream of Spring. I'm 70 next year and hope to read Winter before I pass away. Doubt if I'll get to Spring.