In a somewhat surprising move, Showtime has halted development of the Kingkiller Chronicle prequel TV series and returned the rights to Lionsgate Television. 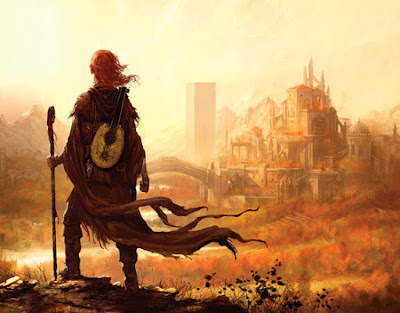 The news comes as a surprise after a period in which a confident Showtime seemed eager to take the fight to old rivals HBO and newcomers Netflix and Amazon, all of them have big-budget fantasy shows in development, shooting or getting ready to air. With HBO prepping two Game of Thrones spin-offs and getting ready to air a Watchmen sequel show and a new version of His Dark Materials, Netflix preparing to launch The Witcher and Amazon beginning filming on both The Wheel of Time and Lord of the Rings: The Second Age this month (albeit only preliminary shooting in the latter case), Showtime seemed well-placed with their new TV project.

However, reports suggest that Showtime may have over-committed to its ambitious, top-dollar TV version of the Halo video game franchise (which recently began shooting) and no longer have the financial bandwidth to commit to Kingkiller at the same time. Releasing the rights voluntarily, especially after the significant amount they paid for them at auction in 2017, suggests that the network may have been at fault in the issue. Lionsgate are now shopping the rights around, but are finding the market glutted with high-budget fantasy projects, with no room at the inns of Netflix, Amazon or HBO.

Lionsgate now seem to be targeting Apple TV, which is still on the lookout for high-profile projects to bolster its launch lineup (which includes a TV adaptation of Isaac Asimov's Foundation saga and a new project from Battlestar Galactica and Outlander showrunner Ronald D. Moore). Apple have not committed to the project so far.

The Kingkiller Chronicle TV series is set some decades before the books and explores the lives of two characters, widely believed to be Kvothe's parents, on the world of Temerant. Lin-Manuel Miranda (Hamilton, His Dark Materials) is set to executive produce, create music and possibly act, whilst John Rogers (Leverage, The Librarians, The Player) is writing and showrunning.

The original plan was for the TV series to launch alongside a big-budget, direct movie adaptation of the first novel in the series, The Name of the Wind. However, progress on getting the movie made stalled earlier this year after would-be director Sam Raimi passed on the project.

Some fans have speculated that studios may be sceptical of the project given that the source material remains incomplete, with the third book remaining incomplete after at least nine years of work. However, the prequel series is not dependent on source material and seems to be a work of passion for the in-demand Miranda, increasing the likelihood it will find a new home elsewhere.
Posted by Adam Whitehead at 19:01

Prolly balked because Rothfuss hasn't finished the books yet. With Harry Potter, they got lucky, but because of Game of Thrones; I am now of the mind no source material should be adapted until it's been completed.